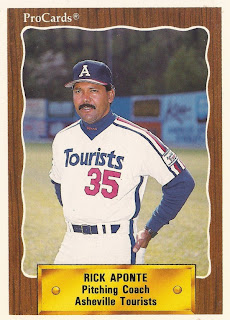 Washington National Odalis Perez had a rough outing in his previous start. In this September 2008 start, though, Perez pitched into the eighth, without giving up a run.

"When I was in the bullpen [earlier in the day], Rick Aponte said, 'The ball is coming out of your hands very, very good.' And I took the same approach to the game," Perez told MLB.com.

Aponte has been handing out similar advice to pitchers now going back three decades, working as both a coach and a scout. And his time with the Nationals in 2008 was one of two seasons in which he gave that advice out in the major leagues.

Aponte's career in baseball began as a player, signed by the Astros in 1976 as an undrafted free agent.

As a player, Aponte played a total of six seasons. He made it to AAA Tucson in 1980 and 1981, but never made Houston.

His playing career over, Aponte started his coaching career, coaching in the Astros organization.

In 1989, Aponte watched over Astros top pick Jeff Juden and liked what he saw, according to The Orlando Sentinel.

"When he pitches, people stop what they're doing to watch," Aponte told The Sentinel that July.

Aponte coached 1990 and 1991 at single-A Asheville under Frank Cacciatore, then 1992 at single-A Burlington. Aponte then became a scout. He also served as a manager and coach in for the Astros in the Dominican Summer League.

For 2007, Aponte left the Astros to be the big-league bullpen coach under Nationals manager Manny Acta. It was Aponte, years earlier, who helped Acta get his start in pro ball, according to MLB.com.

"He taught me how to behave, how to act," Acta told MLB.com of Aponte after the hire. "He taught about being patient. He told me to work hard. He had so much to do with me as a person. He is like a father or an older brother to me."