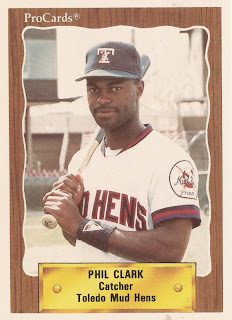 The man overseeing the Tigers scouting and minor league operations, Joe McDonald, went down the list of top Tigers prospects in January 1989. When he got to young catcher Phil Clark, he noted some defensive work still needed to be done, according to The Associated Press.

"Sometimes," McDonald told The AP of Clark, "the bat can take you all the way."

For Clark, his bat, and improved defense elsewhere, did take him all the way. It took him to the majors for parts of five seasons. It also took him to Japan, where he would end his career and become a star with the Kintetsu Buffaloes, pairing with fellow American Karl "Tuffy" Rhodes.

Clark's way to the majors and Japan began in 1986, taken by the Tigers in the first round of the draft. The Tigers took him out of Crockett High School in Texas, where he hit 13 home runs and had a batting average of .605.

He spent his first season at short-season Bristol, then hit single-A Fayetteville and Lakeland in 1987 and 1988. He had three RBIs in a May 1988 game with Lakeland. He also hit a three-run home run earlier that month against Clearwater.

He made AA London in 1989, then AAA Toledo in 1990. Albany Yankees manager Buck Showalter, sizing up the competition, had respect for Clark. "You've got to like Clark," he told The Schenectady Gazette that May.

That spring in 1989, Clark came to camp and did well. He was also called one of the best hitters in the Tigers system.

"I don't want to set a target date," Clark told The AP of his prospects to get to the majors, "because I don't want to put that kind of pressure on myself. I have to work on my defense before I'm ready for the big leagues."

Clark was finally ready for the big leagues in 1992, getting the promotion to Detroit. He played in 23 games for the Tigers hitting one home run and getting 22 hits in 54 at bats.

Despite the promise with the Tigers, they left him unprotected that winter. The Padres then picked him up. Clark also went to the Padres as his brother Jerald Clark was selected away to the Rockies.

"It's really hard to describe how I felt, being that my brother just left there," Clark told The AP in May 1993. "It's something to think that we almost played together."

Clark went on to play three seasons for the Padres, hitting .313 his first year. His second two campaigns weren't as successful, hitting no better than .216.

Three games for the Red Sox in 1996 and Clark's major league days were done. That November, he was off to Japan, signing with the Kintetsu Buffaloes. He played there through 2000.

Clark's 1997 season included 23 home runs and a batting average of .331. He was also called "one of the year's best foreign imports" in Latham's 1998 Guide to Japanese Baseball. He won the league MVP the next year in 1998.

Returning to the United States, Clark has stayed in baseball, becoming a coach. In 2009, he served as hitting coach for the short-season Mahoning Valley Scrappers. In 2010, it was the single-A Lake County Captains.

"It's just all starting to come together right now," Bellows told The Warren Tribune Chronicle in July 2009. "I'm working hard with Phil (Clark) and all the coaches and the hard work is paying off. It's always been in there, it just comes and goes. Hitting is one of the toughest things to do in sports so hopefully I can ride it for a while."