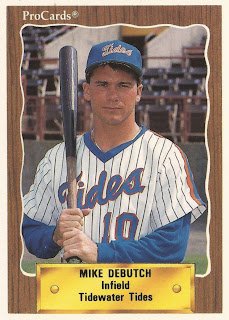 Called up to AAA Tidewater from AA Jackson in 1989, Mike DeButch was told by the Mets they weren't sure how long he'd be there.

He ended up spending 95 games there.

"It could have been a short stay, depending on how quickly the guys in the big leagues healed. I just didn't know and that made it a little tough," DeButch told The Newport News Daily Press that June. "But I wasn't going to complain. I was surprised to get called up, but I wanted to contribute any way I could."

While DeButch got called up to AAA Tidewater in 1989, he would never get called up to the majors. He spent nine seasons in the minors, getting a total of 179 games at AAA, but he got no higher.

DeButch's career began in 1984, taken by the Padres in the 8th round out of Bradley University. At Bradley, DeButch did well enough to earn a plaque in the school's Hall of Fame.

DeButch played that first year at short-season Spokane. At Spokane, DeButch hit .238 with eight doubles. In August, DeButch smacked a two-run single, helping his team to an 8-5 win.

"I just tried to hit the ball hard when I came up," DeButch told The Spokane Spokesman-Review after that game. "I figured if I hit it hard, it would get into play somewhere."

In July 1989 with Tidewater, DeButch knocked in three runs against Richmond. He had a total of 19 RBIs on the year for the Tides.

Returning to Tidewater for 1990, DeButch knocked the game-winner in a June game, on a squeeze play.

"Anytime you get do do something to win the game like that you feel good," DeButch told The Daily Press. "We battled today. Hopefully, we'll get some momentum going and get back into the race. We need to do the little things to win. The little things give us a chance."

DeButch played just two more seasons, an abbreviated two-game stint with the White Sox at AAA Vancouver in 1991 and then 95 games with the Tigers, at AA London in 1992.

But, back in 1989, DeButch was looking forward to a future where he made the majors. Being a utility player was fine with him, as long as he got there, he told The Daily Press.

"I just want a chance to get up there," DeButch told The Daily Press in late August. "Once I'm there, then maybe I can impress someone enough to get a look at one position. The thing is, though, you have to get there first."