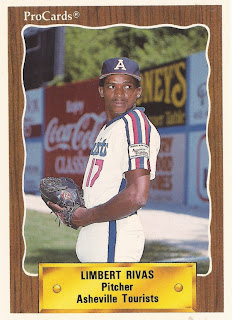 The Asheville Tourists didn't really need a good outing from Limbert Rivas in this early April game, but they got it anyway.

In a game his Tourists would win 13-2, Rivas came on late and pitched a perfect inning.

"The most pleasing thing to me has been our defensive play, and today we got some good pitching," Asheville manager Frank Cacciatore told The Post-Courier afterward of the team's early success. "That makes my job easy."

Rivas was in his second year in the minors that year with Asheville. It was also his last.

Rivas' career began in 1987, signed by the Astros, out of his native Dominican Republic.

He hit the field in the United States in 1989, playing in the rookie Gulf Coast League. In the GCL, Rivas got into 27 games, picking up four saves and three wins. His ERA came in at 4.82.