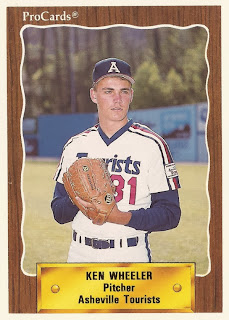 It was a hot day in Savannah. It had to be 110, Ken Wheeler's old manager Frank Cacciatore recalled.

But, there Wheeler was, pitching marathon outing for Asheville in 1990, an outing that his manager remembered 23 years later.

"Back then, we had a little more leeway with innings pitched," Cacciatore told The Greatest 21 Days in August 2013, noting pitch counts remained closely watched. "He threw like 10 innings and only had like 90 pitches."

"He just threw a hell of a ballgame," Cacciatore added.

Wheeler was in his second pro season that year with Asheville. He went on to get three more. He never made AA.

Wheeler's professional career began in 1989, taken by the Astros in the 11th round of the draft, out of Chillicothe High School in Ohio.

With the Astros, Wheeler started in the rookie Gulf Coast League. in 14 outings, eight starts, Wheeler went 1-4, with a 4.00 ERA.

Wheeler played 1991 at single-A Burlington, then started 1992 at high-A Osceola. At Osceola that year, Wheeler started just five games. He was out for the season with a shoulder injury by the end of June.