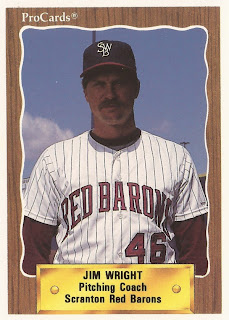 Ubaldo Jimenez' pitching career was placed on pause in 2004, still in single-A. The future Cy Young candidate was slowed by a shoulder injury. It was the first big injury for the Dominican.

But, speaking in November 2004, Rockies minor league pitching instructor Jim Wright liked what he saw in the young right-hander.

"Last year was a learning experience," Wright told MLB.com. "He never even had a stiff arm before. He doesn't know what it's like."

If Jimenez was looking for a coach who knew what arm problems were like, Wright knew exactly what they were like. In a playing career that spanned a decade, Wright lost two full seasons to arm injury. But he still came back, and made the majors.

He also has spent his post playing career coaching other pitchers, including Jimenez and future Hall of Famer Greg Maddux. Wright's coaching career started with the Cubs' system in 1984 and continues into 2011 as the Rockies' big league bullpen coach.

Wright spent his final season as a player with the Cubs organization, the same team he started his coaching career with. Among his early pupils was Maddux. Wright coached Maddux in 1985 at single-A Peoria.

Wright immediately saw Maddux' promise, telling top Cub officials Maddux would end up in Cooperstown, according to The Peoria Journal Star. Maddux also credited Wright with helping him with a down and away fastball.

"That sped my progress up," Maddux told The Journal Star in June 2010, as Peoria retired Maddux' number. "It was a pretty good tip because what I learned in Peoria I was doing my last week with the Dodgers (in 2008)."

Maddux would be one of a number of pitchers to credit help from Wright over the years with helping them along in their careers. By 1990, Wright was back with the organization that drafted him, the Phillies, serving as pitching coach at AAA Scranton.

At Scranton that year, Wright worked with Bob Scanlan, who went on to a nine-season major league career. Scanlan made the majors in 1991 after being traded to the Cubs.

"I don't think the trade had anything to do with it (him becoming a better pitcher)," Scanlan told The Allentown Morning Call. "Working with Jim Wright (the Scranton pitching coach) did. He really helped me with my mechanics and mental approach to the game."

Wright arrived in the Rockies system, starting in 1997 at AA New Haven. He has since served as coordinator and coach in the Colorado system, watching over the Coors Field bullpen since 2009.

In 2003, Wright watched as another pupil heralded Taiwanese hurler Chin-Hui Tsao make his debut. Tsao had his own injury problems, undergoing Tommy John surgery in 2001. He went on to a four-season major league career.

"Everybody worked hard,," Wright told The Denver Post before Tsao's debut in July 2003, "including Tsao himself, to get him to where he is today."