Part 1: Started Something | Part 2: Something Positive 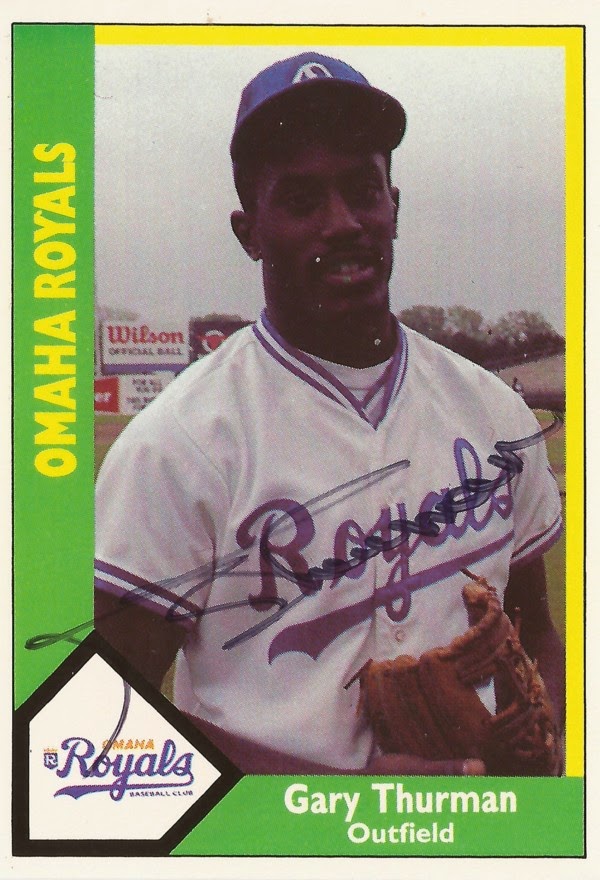 Called up to the majors in late-August 1987, Gary Thurman found himself called into the manager's office rather quickly, he recalled recently to The Greatest 21 Days.

The meeting with Royals skipper John Wathan was because Wathan had gotten a call: Thurman's wife was in labor.

"He said, 'You have two choices,'" Thurman recalled Wathan telling him. "'You can go home, or you can stay to play.' And I chose to stay to play."

The team playing in Chicago, Thurman and his friends jumped in a car after the game and headed for Indianapolis. When they arrived, his new daughter Brytoney was waiting for him, born a half hour before he arrived.

Thurman himself was a major league player, and he would be one in a total of nine seasons, playing largely with he Royals, but also with the Tigers, Mariners and Mets.

Thurman has since served as a coach in the minors, helping others to become major leaguers. For 2013, Thurman served as minor league outfield and base-running coordinator for the Nationals.

Thurman spoke to The Greatest 21 Days before an August game in Harrisburg, Pa., at Metro Bank Park. Thurman was in town visiting the Nationals' AA affiliate the Harrisburg Senators.

In the interview, Thurman spoke of growing up in Indianapolis more a fan of football than baseball. He then spoke of his ultimate calculation to choose baseball, and then his early struggles in the minors.

Thurman went on to play in nine major league seasons, then become a minor league coach.

Thurman, a former first-round pick, got that major league debut in late-August 1987, in his fifth season as a pro. He'd started slowly in his first two seasons out of high school, then his bat picked up, and his speed.
Making his choice to stay and make his major league debut, Thurman thought back to his then-wife, likening the experience to getting married.

"I remember when I got married and my knees, they were shaking so dang gone bad, and my first at bat, it felt the same way," Thurman recalled. "I felt like my knees were clanging together and shaking. I was nervous."

Thurman then noted all the firsts he achieved, hit, stolen base and error. "I did it all, so after that, I was pretty comfortable," he said.

Thurman ended up getting into 27 games for the Royals that year, hitting .296. He returned for 35 games the next and 72 in 1989. Thurman was an outfielder, the Royals already had a pretty good outfield of Bo Jackson, Willie Wilson and Danny Tartabull, he noted.

But Thurman was willing to wait it out.
"I had gotten a taste and knew I could play up there. I just wanted to get back, so I bided my time," Thurman said, adding a short time later, "Once you get there, you always want to get back."


One moment Thurman remembered from his first season was one from the final day of the season. Teammate Willie Wilson was battling for the stolen base title. With Wilson on first and Thurman on second, Thurman needed to make it to third for Wilson's steal of second to count.

Thurman made it, getting his teammate closer to the league lead. Thurman also recalled getting a high-five from Wilson back in the dugout as thanks.

"I felt like I did my part to get him close," Thurman recalled.

Thurman continued playing with the Royals through 1992, getting in 80 games and 88 games his final two seasons. He played 75 games with the Tigers in 1993, then 13 with the Mariners in 1995 and 11 final major league games with the Mets in 1997.
After playing his final minor league game in 1998, Thurman went right into coaching. He returned to the Mariners system, and returned to rookie ball, managing in the Arizona League.

He recalled it as an easy transition, especially switching teams. The level change, though, was jarring.

"I think the worst part of it was the baseball, going from major league baseball and AAA baseball to rookie league baseball, where they make a lot of physical and mental mistakes," Thurman said. "That was the toughest and most frustrating."

But he also got used to it, and felt like he was helping the players get to a higher level, and making a difference in their careers.

Thurman has since served as a manager in the Midwest League and the California League and hitting coach in the Texas League. He's also served as a first base coach in the major leagues twice, with the Mariners in 2007 and the Marlins in 2012.
As for how to get through to younger players, Thurman said that depends on the player.

"You show them, you tell them, you make them do it. You tell them stories, however you think you can get to them," Thurman said. "And you try to do it that way because everybody doesn't learn the same. You try to teach them different ways."

Thurman spoke before the Harrisburg game, as he and Harrisburg hitting coach Eric Fox were heading in for a pre-game talk with the AA Senators.

Thurman said he planned to talk to the team about how difficult the game of baseball really is.