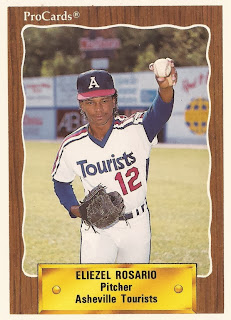 He also started off strong enough to get a promotion to single-A by the end of that season.

For Rosario, though, he couldn't continue that start. He ended up playing in just two more seasons, never making it above single-A.

Rosario's pro career began in 1987, signed by the Astros as an undrafted free agent, out of his native Dominican Republic.

With the Astros, Rosario hit the field stateside in 1988, in the rookie Gulf Coast League. In the GCL, Rosario earned that ace label by going 8-3, with a 1.34 ERA.

By late-August, Rosario was moved up to single-A Osceola. There, he got three starts, picking up a win and an ERA of 4.50. In his first start at Osceola, Rosario allowed eight hits over eight innings for his win.