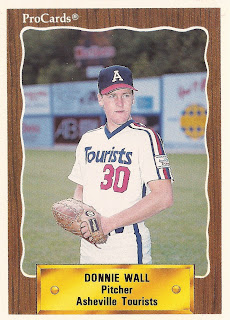 Given a list of his 1990 Asheville Tourists, Frank Cacciatore singled out pitcher Donne Wall for praise.

"There's a guy," Cacciatore told The Greatest 21 Days in 2013 of Wall, "really nobody gave him any credit. He didn't throw extremely hard, but he was one of the hungry guys and he had a nice career in the big leagues."

It took Wall a few years - he didn't debut in the bigs until his seventh pro season - but he made it there. And Wall ended up seeing major league time in that season and seven more, playing for the Astros, Padres, Mets and Angels.

Wall's professional career began in 1989, taken by the Astros in the 18th round of the draft, out of the University of Louisiana at Lafayette. Wall's name has also been spelled Donnie Wall.

Wall played his first year at short-season Auburn, moving to the Cacciatore-managed Tourists in 1990. He first made AA Jackson in 1992, then AAA Tucson in 1993.

By June 1995, Wall still hadn't gotten his call and he was still in Tucson.

"I don't want to sound like a complainer, but I want my chance," Wall told The Tucson Citizen that June. "I still enjoy the game on any level, but every player's dream is to reach the big leagues."

Wall got just eight starts for the Astros in 1997, then turned reliever after landing with the Padres for 1998. With the Padres, Wall got into 46 games, with a 2.43 ERA. He also got the chance to pitch in the postseason.

Wall pitched in all three rounds, including two games in the World Series. But a bad pitch from Wall in Game 1 turned into a three-run Chuck Knaublauch game-tying home run, a game the Yankees went on to win.

"I fell behind him and didn't do my job," Wall told The New York Times afterward. "I gave him a pitch to hit and he hit it. In that situation I have to throw a fastball. We can't let any more base runners get on. I have to make him hit the ball and I did. Unfortunately he hit it out of the ball park."