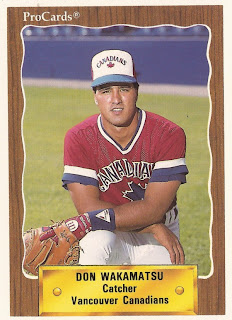 Don Wakamatsu had a difficult task in his first major league game. The task for the catcher Wakamatsu undertook in his debut: Catch knuckleballer Charlie Hough.

Wakamatsu did well enough that day. But he couldn't do well enough to stay in the majors. He got into 18 games for the White Sox, marking the extent of his major league playing career.

Years later, Wakamatsu had another difficult task, taking the helm of a 100-loss Mariners team and making them into a winner. The team improved under Wakamatsu, but it was an improvement he couldn't sustain and he was out before his second season was complete.

Wakamatsu's professional baseball career began in 1985, taken by the Reds in the 11th round out of Arizona State.

Wakamatsu made AA Chattanooga in 1988, getting into 79 games, hitting .238. It was his last season with the Reds, Wakamatsu developing a rotator cuff problem, according to The AP.

In his 18 games with Chicago, Wakamatsu got seven hits in 31 at bats, for a .226 average. His last four games were as a September call-up. His final game of the year, Oct. 5, also turned out to be the final game of Wakamatsu's major league career.

For 1992, Wakamatsu signed with the Dodgers, playing at AAA Albuquerque. His playing time was also deminishing. He got into 60 games in 1992 and 54 back at Albuquerque for 1993.

Wakamatsu continued playing in the minors into 1996, his final year Wakamatsu serving as both a player and a coach at AA Port City.

By 1997, Wakamatsu made the manager's office for the first time, in the rookie Arizona League. BY 1999, he was managing at AA El Paso. By 2003, Wakamatsu was back in the majors as bench coach for the Rangers.

In November 2008, Wakamatsu made the major league manager's office with Seattle. He also became the first Asian-American manager in major league history.

After being named Mariners skipper, Wakamatsu tried to describe his managerial style.

"Communication and leadership," Wakamatsu told reporters. "Those two things go hand in hand for me. It's important that people know what's going on, where they stand in a certain system, and that's going to be my motto."

Wakamatsu took that 100-loss team to a 85-77 record his first year, finishing in third place. In his second, he went 42-70, getting fired in August.

"The organization makes the decision to move on, and I respect that. I respect that they gave me the opportunity," Wakamatsu told The AP afterward. "My whole thing is that I will have a measure of disappointment in not being able to [win]."

Wakamatsu has since returned to the bench, serving as bench coach for the Blue Jays in 2011 and continuing into 2012.For 2013, Wakamatsu is serving as a pro scout for the Yankees.