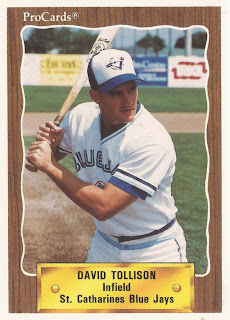 David Tollison won a regional coaching award in 2011 and the head of the group that handed out the award explained why.

Tollison won the award from the Positive Coaching Alliance-Dallas as the athletic director for the Episcopal School of Dallas.

"David is known for his attention to detail, emphasis on fundamentals and instilling a sense of confidence in each and every player," group executive director Barry Smink said in announcing the award. "He exemplifies the core values that he teaches: trust, teamwork, motivation, sportsmanship, character, and how to become a better person in the long run."

Tollison started his coaching career, and teaching those core values, shortly after leaving his first professional career, baseball. Tollison ultimately spent six seasons in pro ball, making it to AA, but no higher.

Tollison's baseball career began in 1990, taken by the Blue Jays in the sixth round of the draft, out of the University of Texas.

With the Blue Jays, Tollison started at short-season St. Catharines, hitting .214 over 42 games. He also hit two home runs and knocked in 14.

From there, Tollison played in independent ball, signing on with Duluth-Superior of the Northern League. He hit .240 over 71 games there.

He played two more seasons in independent ball, both for Rio Grande Valley, of the Texas-Louisiana League. He hit .281 and then .308 to end his career.