Claude Osteen, So Many Scenarios - 363 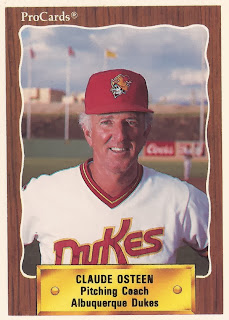 And he wanted to come back for another.

"The only control I have is the type of job I've done, and I think I've done a good job under the circumstances," Osteen told The Los Angeles Times that September.

"It took a while to start to get [the pitchers] to believe in some things," Osteen added later. "But it hasn't been frustrating for me because, as a pitching coach, you're constantly presented with so many scenarios. You just have to always figure things out as best you can. Period."

Osteen began his pitching career in 1976 at Reading, shortly after being cut by the White Sox. Osteen had just completed a playing career that included nine seasons with the Dodgers.

He made it back to the majors in 1977, accepting the job as pitching coach of the Cardinals. He also accepted the job of reigning in The Mad Hungarian Al Hrabosky, without having the pitcher lose his edge.

"We felt perhaps he was overusing it in the past," Cardinals manager Vern Rapp told The Chicago Sun-Times of what he and Osteen told Hrabosky about the pitchers unusual intimidation techniques, "but we told him to use it to his advantage."

Osteen stayed in St. Louis through 1980, when an incoming Whitey Herzog let him and others go. He returned to coaching in 1982, with the Phillies, watching over such pitchers as Hall of Famer Steve Carlton. He stayed in Philadelphia for seven seasons and saw his pitching staff into the 1983 World Series.

Speaking to the Reading Eagle after he was hired in Philadelphia, Osteen said his long playing career helped him with his coaching.

"I've made a thorough study of the entire pitching delivery," Osteen told The Eagle. "I've developed a series of check points, so if something goes wrong you can track the problem down. And I'm a great believer in film."

By the late 1980s, Osteen saw two other Osteens join the playing world, his two sons. Sons Dave Osteen and Gavin Osteen both played in the minors in the late 1980s and early 1990s, but never made the majors.

By 1992, Osteen was back with the Dodgers, serving as pitching coach for AAA Albuquerque and overseeing the development of such pitchers as Pedro Martinez. Osteen had a hand in delaying Martinez' debut, over sore shoulder concerns, according to The LA Times.
"Pedro is still an outstanding prospect," Fred Claire, Dodger vice president, told The LA Times that July. "But we have talked to Claude Osteen and we think he needs to keep working through coming back from his sore shoulder."

After spending two seasons as pitching coach for the Rangers, the successor to one of Osteen's other playing days teams, it was back to Albuquerque in 1996 and to Los Angeles in 1999. He did get his second year with the Dodgers in 2000, after which he became a scout.

In 2003, Osteen returned to coaching, with the Diamondbacks at AA El Paso.

"Anytime you bring in a staff member with Claude Osteen's outstanding experience, tremendous knowledge and genuine passion for the game," Tommy Jones, Diamondbacks director of minor league operations told MLB.com as Osteen was hired, "you are making your organization stronger."