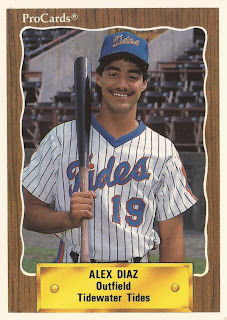 Alex Diaz was no Ken Griffey Jr., that was clear. But, when Griffey went down for three months with a wrist injury in the summer of 1995, there Diaz was, patrolling Griffey's center field in Seattle's Kingdome.

Diaz just went out to play his own type of game.

"They need to understand what type of game I play," Diaz told The Associated Press just over a week after Griffey went down. "I'm not a power hitter like Ken Griffey Jr. I play pretty good defense, I have a pretty good arm and I can run. I'm the type of guy who plays hard and tries to help my team in every game."

Diaz played in 103 games for the Mariners that year, his fourth in the majors. He got 27 RBIs on the year and stole 18 bases. His average was .248. But he did help get the Mariners along to Griffey's August return, en route to Seattle's first division championship.

That season in 1995 came Diaz' ninth season in professional baseball. Diaz was signed by the Mets in 1986 as an undrafted free agent. His first playing time came the next year, in 1987 at rookie league Kingsport and short-season Little Falls.

Diaz first made AA in 1989 at Jackson then AAA Tidewater for 1990. With the Tides, Diaz hit .256 with 36 RBI and 26 stolen bases. Then it was off to the Expos system, traded there in a four-player deal that included Terrel Hansen. Assigned to AAA Indianapolis, Diaz had two RBIs in an early April game.

Another trade, in October 1991, and Diaz was with the Brewers, the organization his father Mario Diaz played for in the 1970s, according to The Milwaukee Journal. Diaz played much of 1992 at AAA Denver, but he did receive two looks at the majors, getting into 22 games.

That next spring, Diaz got a longer look, and he impressed.

"He's been one of the guys who has been lighting up my eyes," Brewers manager Phil Garner told The Journal that spring. "He comes to spring training, he's put about 10 pounds on and he's knocking balls off the walls and in the gaps. He still runs good and his arm is outstanding."

But it was a rocky start to the regular season. The speedy Diaz got his first start in center field April 12, then hit into two double plays. That slow start continued in to early May, when he broke his ankle in his own run-in with an outfield wall. He returned for September, heating up enough to bring his average up to .319.

By way of an injury to another player, Diaz was in the Brewers' opening day lineup for 1994, getting two hits and batting in three.

"Everybody wants to start the first game of the season," Diaz told The Journal. "I called all of my family and told them to watch the game on TV."

Diaz played nearly the full season with the Brewers, going on the disabled list in early August with a strained elbow, according to the Associated Press. But he didn't miss much. The strike started shortly afterward.

But his time with the Brewers was done. Milwaukee placed him on waivers and that's when the Mariners claimed him, just in time for Diaz to take over for Griffey.

With Griffey healthy again, Diaz was only needed for 38 games in Seattle in 1996 and was released. After briefly going back to the Mets, Diaz signed with the Rangers. It was the Giants for 1998 and the Astros for 1999, his major league career ending after parts of eight seasons.

Diaz went on to be credited with three Mexican League seasons, his last in 2003, his professional career finally coming to a close.