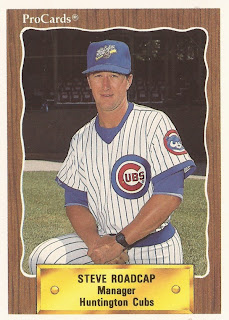 As Steve Roadcap began his third season as a minor league manager in 1990, he recalled his own playing days, as a catcher in the Cubs organization.

Roadcap, he recalled of himself, was never known as a great hitter.

"My strong points were on the defensive side," Roadcap recalled on his card back. "I had a good arm, handled pitchers well, blocked balls, was a leader and played hard."

From that brief playing career, Roadcap took those leadership skills and turned them into a long career in the minor leagues as a coach, manager and coordinator.

Roadcap's career in baseball began in 1982 as a player, taken by the Cubs in the 18th round of the draft, out of Francis Marion University in South Carolina.  Roadcap grew up in Pennsylvania, graduating from Upper Dauphin High in Elizabethville.

With the Cubs, Roadcap played five seasons as a catcher, making it to AAA Iowa, but never making Chicago.

By 1988, he started with the Cubs as a manager, at rookie Wytheville in the Appalachian League, staying at the helm of the Cubs' rookie league team through 1990.

After a season as hitting coach with AAA Iowa, Roadcap returned to managing, helming the Cubs' single-A team in the Midwest League for five seasons.

In 1996, managing at Rockford, Roadcap managed his team from a start that saw the team 16 games below .500 in May, to win a playoff spot later in the year. To The Chicago Tribune in September, Roadcap credited his players.

"I don't make those decisions, but they all contributed to us coming a long way back," Roadcap told The Tribune. "We were definitely proud of what we did."
Roadcap continued with the Cubs through 1998, managing his final two seasons at high-A Daytona.

As he started his season in 1997, Roadcap told The Orlando Sentinel his philosophy for managing.

"I think as a minor-league manager, you've got to adapt your style to whatever kind of club you have,'' Roadcap told The Sentinel. "And the last two years, I've definitely had a speed club. I haven't had power."

Roadcap moved to the Mariners system in 1999, then to the Phillies system, managing at short-season Batavia in 2006.

In 2009, Roadcap reached his milestone 1,000th managerial victory, doing it with AA Reading.