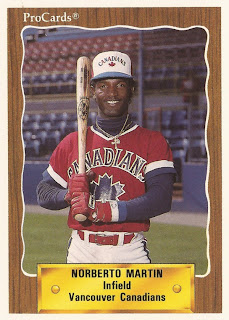 Norberto Martin went into 1994 hoping to make the White Sox out of spring training, but off-season surgery prevented that, The Chicago Tribune wrote.

"I was sad-but that's life," Martin told The Tribune in June, having returned to the big club and having just hit his first big league home run. "So I had to go back to Triple A and do my best. Again."

Martin saw his first extended time in the majors that year, 45 games. He'd debuted the previous year, getting into eight contests - after nearly a decade in the minors.

Martin would go on to do his best, getting into a total of seven major league seasons as a utility infielder, his last big league time coming in 1999.

Martin's career began back in 1984, signed by the White Sox as a 17-year-old amateur free agent out of Puerto Rico.

He started with the rookie Gulf Coast League White Sox, Through his first five seasons in the minors, Martin never made it above single-A. He played 1988 at single-A Tampa.

Martin lost 1989 to injury, but returned for 1990 and made AAA Vancouver. He stayed at AAA with the White Sox through 1993, getting his first look at the majors in September 1993.

In eight games that September, Martin got five hits in 14 at bats, appearances that came largely after the White Sox won their division. Martin's second hit proved the game-winner in a late-September game against Seattle.

"I'm just happy to be participating," Martin told The Associated Press afterward. "We clinched and now they get the chance to see me play in the big leagues. You would think I'd be nervous, but I'm not. I'm just hoping I get a shot to play on a full-time basis sometime."

In the White Sox 1997 opener, it was Martin who hit a game-tying home run in the ninth. "If I see a good pitch to hit, I hit it," Martin told The Tribune. "It happened to be right there."

Martin moved to the Angels in 1998, getting into 79 games. His final season came in 1999, with nine games played with the Blue Jays. He is last recorded as playing, though, in 2002, in Mexico and in the independent Atlantic League.

Martin has since took up instruction. Most recently, he is serving as a hitting and defensive instructor for Grand Slam USA in Raleigh, N.C.