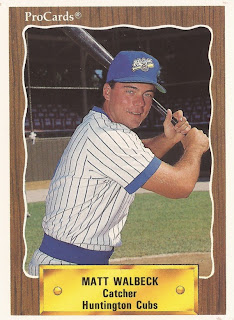 Matt Walbeck knew his time in the majors might be limited in May 1998. He was filling in for another injured catcher, but he was playing well.

So, when the question came up on what would happen when the other player Todd Greene's health returned, Walbeck knew what was going to happen, according to The Los Angeles Times.

"I'm in no position to . . . moan and haven't been for some time," Walbeck told The Times. "When Todd comes back, he'll be the catcher. But I'm sure I'll have a place on the team. Certainly, I've showed I can play."

Walbeck showed he can play. And he continued to play. That year ended up being his second major league season with more than 100 games played.

Walbeck ultimately showed he could play in a total of 11 major league seasons and he has since shown he count translate his efforts to the minor league manager's office.

As a manager in the minors, Walbeck has taken his teams to multiple championships, winning multiple awards for himself.

Walbeck's playing career began in 1987, taken by the Cubs in the seventh round of the draft out of Sacramento High School in California.

With the Cubs, Walbeck started at rookie Wytheville, hitting .314 over 54 games. He moved to single-A Charleston for 1988 and single-A Peoria for 1989.

For 1994, the Cubs sent Walbeck to the Twins in a three-player deal. The result was Walbeck making Minnesota for 97 games that year, hitting .204. In April, he ended up catching a no-hitter, as Scott Erickson went the distance.

"He was strong, he was sharp, he was awesome," Walbeck told The Associated Press afterward of Erickson. "He was in a self-confident rhythm."

In May 1998, Walbeck went through a stretch where he had trouble throwing runners out. He told The Times he had to not make things complicated.

Walbeck ended up playing in four more seasons after that, playing his final two seasons back with the Tigers.

By 2004, Walbeck had started his new career, as a minor league manager at single-A with the West Michigan White Caps. He also took the team to the league championship.

Walbeck stayed with West Michigan for two more seasons, winning the championship again in 2006. He moved to AA Erie for 2007 and, in 2008, spent a season as third base coach in Texas.

He returned to the minors in 2009 with the Pirates at AA Altoona, winning another championship and a Manager of the Year honor. But the Pirates fired him after the season ended. His most recent managerial stint was in 2011, at single-A Rome, but was let go before the season was out.