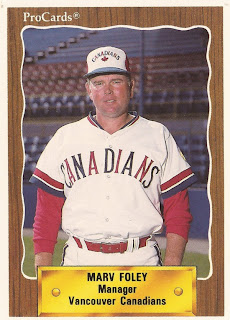 Marv Foley realized a lot of his players felt they should be in the majors, Foley told MLB.com in 2003. He also realized there were only 25 slots on a big league roster.

The key, he told MLB.com, was to ensure his players knew what they needed to do to be ready when their times came.

"I just keep communicating with my players, that they'll get their chance if they play well," Foley told MLB.com that October. "The fact you're not in the big leagues in April doesn't mean you won't be there in May. Be a good teammate and a good leader, and good things will happen to you."

Foley spoke after being named by the Rockies to manage their AAA team in Colorado Springs. It was the latest post for Foley in a long career in baseball as a manager, coach and coordinator. That career also included a decade as a player - five seasons in the majors.

That career began in 1975, when Foley was selected by the White Sox in the 17th round of the draft. It was with the White Sox that Foley spent the majority of his playing career, including four of his five major league seasons.

In those five seasons, the catcher played in 203 games, hitting 12 home runs and batting .224.

Foley played his last professional game in 1986 and, by 1988, Foley was managing in the minors. That year, he took the helm of the Florida State League's Tampa White Sox.

By 1989, Foley was touting a young outfielder just acquired by the White Sox, Sammy Sosa. Foley told The Chicago Tribune Sosa could throw, hit and hit with power.

"He's a little rough around the edges, that's all," Foley told The Tribune before Sosa's major league debut that August. "But he's got the potential to be a great one. I would say in three years, Sammy's going to be a front-line major-league player."

Foley managed that year at AAA Vancouver, staying there through 1990 and into 1991. He landed with the Cubs in 1992, serving as manager at AA Charlotte. The next year, he hit AAA Iowa, then made Chicago as bullpen coach in 1994.

Speaking to The Los Angeles Times in 1993, as manager of the Iowa Cubs, Foley relayed his thoughts on dealing with his players, the ones that get promoted and the ones that come back.

"It's very important for me to be honest with them," Foley told The Times. "That way, we can work together, for the betterment of the player."

In 1994, as Chicago's bullpen coach, Foley recommended another young player, Karl Rhodes, according to The Tribune. Foley had watched Rhodes at Iowa in 1993. In 1994, Rhodes went on to have his biggest season in the majors. Rhodes later made a bigger name for himself in Japan.

Foley moved to the Orioles system for 1995, managing at AAA Rochester. He managed there for five seasons, through 2000. The only exception in that span was a season in Baltimore as first base coach.

Foley joined the Rockies system in 2003, managing at AA Tulsa. The next year, he made the move to AAA Colorado Springs, staying there through 2005.

With Colorado Spring's Foley's communication apparently showed enough results for the Rockies to have him continue to communicate, as a roving catching coordinator. For 2011, Foley is returning to the majors with Colorado, as a big league catching instructor.

But, back in 2004, that communication Foley promised included for outfielder Rene Reyes the communication that all players want to hear: The call back up to the major leagues.

Reyes' return came after a big Colorado Springs win that May.

"We were celebrating and [manager Marv Foley] said, 'Come here; I want to see you,'" Reyes told MLB.com. Reyes was going back to the majors.