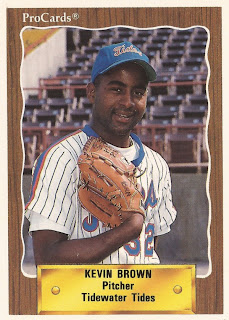 Going into 1991, the Brewers needed a left-handed starter and, there to try and fill that need, was Kevin D. Brown, The Milwaukee Sentinel wrote.

"He seems to have good poise," Brewers general manager Harry Dalton told The Sentinel of Brown. "He doesn't seem to get too rattled out there."

Brown ended up making the team out of spring training, and getting 10 starts through the end of June. It was his second season with time in the majors. He would only get one more.

Brown's career began in 1986, taken by the Braves in the first round of the January draft out of Oroville, Ca., and Sacramento City College.

Brown played that first year at rookie Idaho Falls, going 3-6 in 12 starts. He then moved to single-A Sumter and Durham in 1987, going 11-5 between them.

For 1988, Brown arrived in the Mets system after a trade. With the Mets, Brown played at single-A St. Lucie and got a look at AA Jackson. He got 13 starts at AAA Tidewater in 1989. In 1990, Brown made Flushing.

Brown debuted with the Mets in late July. He got into two games in relief before being traded to the Brewers. He finished off the year with three starts, five total appearances. He went 1-1 with the Brewers, with a 2.57 ERA.

Brown returned to the Brewers for spring 1992. But, after his unsuccessful 1991, expectations were lower.

"This game is 'What have you done for me lately?'" Brown told The Sentinel early that Spring. "I can deal with that. Actually, it's a burden off my shoulders."

Brown, though, didn't make the team. He was then taken off waivers by the Mariners. Brown got two appearances for the Mariners in early April, but they were the last major league appearances of his career.

Brown played out 1992 at AAA Calgary, then the next year at AAA Phoenix with the Giants. He made one last return in 1995, playing the season at AAA Omaha and independent Corpus Christi, ending his career.