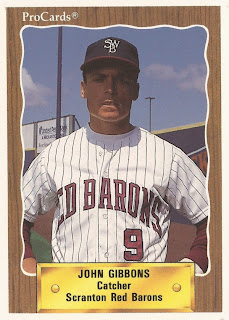 Mets manager Davey Johnson was coming off a world championship in spring 1987, looking for a way that his Mets could repeat.

One of Johnson's young catchers vying for a big-league job, John Gibbons, believed Johnson had the temperament to ensure the Mets didn't lose their edge, according to The Miami News.

"He's not a real, loud vocal manager," Gibbons told The News. "He's more of the type who lets you do your own thing. He has a different style. It's nice to play for someone like that rather than a guy who's always screaming at you."

Gibbons ended up not playing for Johnson that year in Flushing. After a career where he began as a first round pick, and saw him play in just 18 major league games, Gibbons wouldn't make the majors again as a player.

But he did make it back, as a manager in his own right. Seventeen years after Gibbons gave his assessment of the Mets manager, Gibbons was named manager of the Toronto Blue Jays, a job he resumed in 2013. He would also be assessed himself in similar terms, described in one wire account as a laid-back skipper, "a player's manager who mostly tried to stay out of his team's way."

Gibbons playing career was spent largely as a catcher in the minors. He was selected by the Mets as a compensation first-rounder in 1980, the same year the Mets took Darryl Strawberry No. 1 overall.

Gibbons hit AA Jackson briefly in 1982, then AAA Tidewater in 1984. He also debuted with the Mets in 1984, playing in eight April games and two more in September. Between them, he got 31 at bats, but just two hits.

Gibbons didn't return to New York until August 1986, playing in another eight contests. He got 9 hits in 19 at-bats, bringing his career average up to .220.

In one game, Aug. 26, the Mets backstop helped turn a game-ending double play, off a single. Gibbons took the 11th inning throw, tagged out the runner at home, then fired it to third to cut-down the aggressive base runner, ending the game with a 6-5 Mets win, according to The Associated Press account.

But those games with the Mets in 1986 were his last in the majors. He didn't make it after that spring in 1987, spending the year back at Tidewater. By 1988, Gibbons grew frustrated, something that was obvious in comments to The New York Times.

Gibbons did return to AAA, but not Tidewater. He was traded April 1 to the Dodgers and sent to Albuquerque. Gibbons went on to play two more seasons, with the Rangers system in 1989 and the Phillies system in 1990, without getting back to the majors.

His playing career over, Gibbons began his coaching career as a minor league instructor back with the Mets. By 1995, he was managing the rookie league Kingsport Mets. In 1998, he helmed the AA Binghamton Mets, 1999 he was with AAA Norfolk. He joined the Blue Jays system in 1992 as Toronto's first base coach.

In August 2004, Gibbons was named Toronto's interim manager, a job he would win full-time by year's end. Gibbons told The New York Daily News that August he wasn't going to change his style.

"They would probably say I am a players' coach," Gibbons told The Daily News. "That doesn't mean being one of the boys or a doormat; I am not that. I am someone who wants to be in the foxhole with you."

Gibbons spent three full seasons with the Blue Jays, his best an 87-75 mark in 2006. Going into 2008, however, his grip on the job was shaky, The Canadian Press reported. A 4-13 stretch in June sealed his fate.

"You never really anticipate it, there's always that possibility," Gibbons told reporters after he was fired. "We were struggling, there's no question about that. Hopefully change is good. I'm still a big fan of these guys and I want to see them succeed."

Gibbons has since returned to the Blue Jays as manager for 2013.