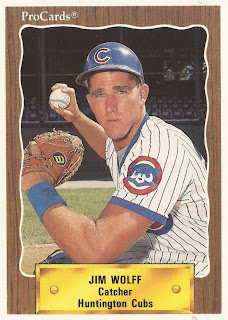 After a rash of injuries cut short his first two professional seasons, Jim Wolff appeared to be staying healthy and ready to move up, his hometown Boca Raton News wrote.

The catcher at single-A Peoria just needed to work on his batting average, a team official told The News.

"If Jimmy improves his hitting," an unnamed Cubs official told The News, "he's going to move right up this organization."

Wolff, though, couldn't improve his hitting. And he played for the Cubs in just one more shortened campaign. After a brief stint in independent ball, Wolff's career ended without moving higher than high-A.

Wolff's career began in 1990, taken by the Cubs in the ninth round, out of Palm Beach Community College.

With the Cubs, Wolff started at rookie Huntington. At the outset of that season, he told team officials what he hoped to do.

"I've been playing since I was six," Wolff is quoted as saying on his Huntington card back. "I want to take baseball as far as I can - possibly to the major league level. After baseball I want to finish my degree."

At Huntington, though, Wolff got into just 31 games, a broken hand carving seven weeks out in the middle. To start the year, Wolff hit two home runs in his first five games, The News wrote. On the year, over 31 games, he hit just .191.


For 1991, Wolff returned to Huntington for another 50 games, hitting .207. He hit four home runs, knocking in 20. He knocked in one of those runs on a single in July.

His 1993 season ended up being his last in the Cubs system. It was also another shortened season, just 35 games between high-A Daytona and time back in rookie ball. He made it back to Daytona for season's end, going 2 for 3 in one game, knocking in two.