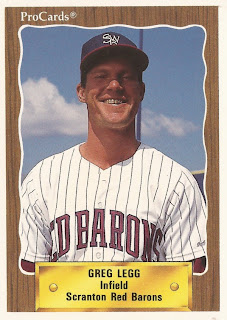 Once they got those appearances, though, they had to make the most of them.

Legg has been a coach or a manager in the minors since his own playing career ended in 1994. Before that, his playing career spanned 13 seasons, Legg taking advantage of his own opportunities to make the majors in two seasons.

Throughout, Legg has only played or coached for one organization, the Phillies, continuing as hitting coach for the Phillies' single-A Lakewood squad in 2013.

Legg's career with the Phillies began in 1982, taken by Philadelphia in the 22nd round of the draft, out of Southeastern Oklahoma State University.

With the Phillies, Legg started at single-A Peninsula, getting 44 games there and hitting .343. He moved directly to AA Reading in his second campaign, hitting .306 over 90 games.

In one early-May game in 1983, Legg's two-run single proved the difference in a Reading win.

"It felt good; it was about time," Legg told The Reading Eagle afterward. "I'm just happy to be here."

Legg got into three games for the Phillies that April, all late in games. He didn't start his first game until September.

After that first start, The Allentown Morning Call noted that Legg was eyed for the second base job in Philadelphia, if it opened up. In that first start, Legg proved he could handle the majors, knocking three hits, including a double.

"He did a heckuva job for his first big league start," Phillies manager John Felske told The Morning Call. "He's a good player. We've had good reports on him all year. I can see why."

Legg ended up getting into a total of 11 games for the Phillies that year, but just three the next. Those 14 total games proved the extent of his major league career.

Legg, though, continued playing for another seven seasons in the minors, mostly at AAA Scranton. He didn't play his final game until 1994.

That same year in 1994, Legg is credited as hitting coach at single-A Clearwater. He got his first managerial job in 1997, at short-season Batavia.

He's managed a total of 11 seasons in the minors, including three seasons back at AA Reading. Since 2008, Legg has served as hitting coach at Lakewood, continuing in that post in 2013.

In 2002, as he took the helm of Reading for the first time, Legg looked back on his long association with the Phillies in a conversation with The Eagle. The Phillies, he told The Eagle, were behind him in good times and in bad.