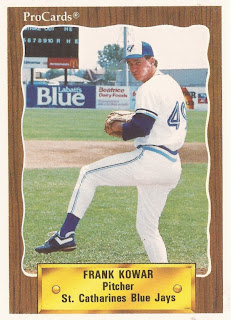 By mid-May 1990, Frank Kowar had set a school record at the University of North Carolina-Charlotte.

That school record for the pitcher was saves. Kowar had eight of them. It was also enough to get a mention in The Chicago Tribune.

From that record, the Cubs picked Kowar, a Chicago-native, up in the 38th round of that June's draft. Kowar's pro career, and his pro save total, though, were limited. He played just a single season, 15 outings, at short-season St. Catharines.

Kowar, whose name has also been spelled Frank Kower, went to UNC-Charlotte from 1987 to 1990. In 1990, he got into 31 games for the 49ers, still tied for most appearances in a season at the school.

He also went on to get a total of nine saves that year in 1990, a number that remained the school record for 10 years, according to the school's media guide.

From there, Kowar turned pro, signing with the Blue Jays as that late-round pick, and was assigned to St. Catharines in the New York-Penn League.