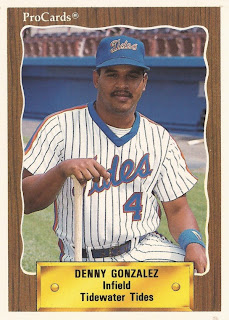 Runners were on second and third, Denny Gonzalez' Pirates were up by one and Gonzalez hoped to extend that lead - in his major league debut.

Gonzalez didn't even get to swing the bat. The Cardinals walked him, intentionally walked him.

"I didn't expect that," Gonzalez told The Pittsburgh Press afterward the Pirates win. "But third base coach, Hal Lanier, he knows me from the Dominican."

Gonzalez didn't get his first hit until three days later, in a three-hit performance, again against the Cardinals. He went on to play in a total of five big league seasons, 98 total games. He also got intentionally walked just two more times.

Gonzalez' career began in 1981, signed by the Pirates out of his native Dominican Republic, the place where Lanier had seen him play previously.

He played that first year for the rookie Gulf Coast League Pirates, hitting .346. He moved all the way to AA Buffalo and AAA Portland in 1982, hitting .257 between them.

In 1985, Gonzalez got into another 35 games with the Pirates, hitting .226. In a September game, Gonzalez beat out a grounder, knocking in a run.

"I think I was lucky this time," Gonzalez told The Press after that game, "because I didn't hit the ball good today but I got that base hit. Luck is one thing that can make you win a lot of games in baseball."

"The last two years were kind of tough," Gonzalez told The Pittsburgh Post-Gazette after getting recalled in June 1988. "The knee kept my mind busy for a long time. But this year, everything is positive. It's a new year."

Gonzalez played in just one more year in the majors, in 1989. He played in eight games for the Indians that year, ending his big league career.

Gonzalez, though, continued playing for nearly another decade in the minors and overseas. He played in Japan in 1991 and 1992 with Yomiuri. He moved to Mexico in 1993, last recorded playing there in 1998. He has since stayed in baseball, scouting for the White Sox.