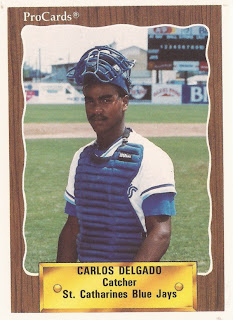 Talk was, going into that spring, that Carlos Delgado was ready for the majors.

He was. He also hit home runs in each of the first two games of the year. Over the first seven games, he hit five, including two in that seventh game, April 11.

"I feel pretty good at the plate," Delgado told The Associated Press after that two-home-run effort. "I was in good shape in spring training. I'm just trying to hit good pitches. I don't care where they go."

Going into that year, Delgado had only seen time in two major league games, with the Blue Jays the previous September.

By the time his career was done, Delgado had seen time in more than 2,000 major league games. He also had hit nearly 500 home runs. Along the way, he made two All-Star teams and, at one point, was the highest-paid player in the game.

Delgado's career began in 1988, signed by the Blue Jays as an amateur free agent, out of his native Puerto Rico.

From there, Delgado's home run total continued to increase, hitting 38 in 1998. That July, Delgado went through a slump, breaking out of it mid-month in a Blue Jays win.

"He's the key to the ballclub," Delgado's manager Tim Johnson told The AP after that win. "He's a guy we need."

In 1999, Delgado hit a career-high 44 home runs, then 41 the next season and earning his first All-Star nod. Delgado was rewarded in October 2000 with a record $68 million, four-year deal from the Blue Jays, making him briefly the highest-paid player in the game.

Delgado stayed with Toronto through 2004, having a season in 2003 where he came in second in the MVP voting to the Rangers' Alex Rodriguez.

After spending a season with the Marlins, Delgado moved to the Mets, where he played his final four years, last playing in the majors in 2009.

His last complete season, 2008, also marked the last of 13-straight seasons where he never hit fewer than 24 home runs in a year. In eight of those he hit more than 30, three more than 40.

After making attempts to return, Delgado finally formally retired in April 2011. In doing so, he referenced where he came from and the way he played the game.