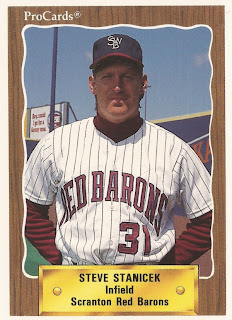 Steve Stanicek's major league career wasn't long, all of 13 games. But he did get up to the majors twice, two years apart.

It was something he told The Joliet Herald-News in 2009 he wouldn't trade.

"I dreamed about that, and most kids who play baseball dream about that, all the way through," Stanicek told The Herald-News, adding later, "I wish it would have lasted longer, but it's a different game. You have to take advantage of the little opportunity you may have. And some guys never, ever get an opportunity like that."

Stanicek got his first opportunity with Milwaukee in 1987, after six seasons in the minors.

His career started off with high expectations, taken by the Giants in the first round, 11th overall, in the 1982 draft. The Giants took him out of the University of Nebraska.

He made AA Shreveport in 1984. The next year, again at Shreveport, was the first year Stanicek hit well, at .282, his previous high at .246 in 1982 at single-A Fresno. It was enough for people to start to notice, namely the Brewers.

The Brewers picked up the minor leaguer Stanicek for another minor leaguer, Rob DeWolf, in March 1986. The trade put Stanicek en route to the majors. Sent to AA El Paso for 1986, Stanicek made AAA Denver in 1987.

In the Brewers system, the former first-round draft pick woke up. Stanicek hit .343 at El Paso, then .352 at Denver. He hit 25 home runs each year, including a grand slam for Denver in April 1987. His 1986 performance earned him Brewers minor league player of the year honors.

"His versatility makes him even more attractive at the major league level," Brewers farm director Bruce Manno told The Milwaukee Journal in August 1987.

Stanicek made his major league debut that September, on Sept. 16. It was a debut just 15 days after his younger brother Pete Stanicek's debut with Baltimore. Steve Stanicek played in four games with Milwaukee that September, getting two hits in seven at-bats.

Steve Stanicek returned for spring training in 1988, but was slowed by a knee injury. He also spent the year at Denver, only playing 27 games before being released at year's end.

Soon signed by the Phillies, Stanicek spent 1989 at AAA Scranton. That September, Stanicek would get his second and final call-up. He played in nine games for the Phillies, going 1 for 9.

More recently, Stanicek has coached high school baseball. He left Lockport Township High, near his hometown of Lake Forest, Il., in May 2010 after four years as coach.