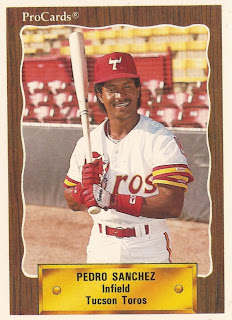 The Orlando Twins were one out from forcing an 11th inning in an August 1989 contest against Columbus.

But, standing between the O-Twins and that third out was Columbus Mudcat Pedro Sanchez.

With the bases loaded and the score tied at five, Sanchez launched a walk-off grand slam to give Columbus a 9-5 victory, The Orlando Sentinel wrote.

It was one of seven home runs Sanchez hit that year for the AA Mudcats, part of a season where he hit .268.

Sanchez, though, never got the opportunity to hit a home run, much less a walk-off, in the majors. He reached AAA, but never reached the majors.

Sanchez' career began in 1985, signed by the Astros as a free agent out of his native Dominican Republic.

Sanchez hit single-A in 1987 and 1988, at Asheville and Osceola, hitting .269 and .247 respectively. In 1988, Sanchez helped send Osceola to the Florida State League championship game, scoring the series-winning run on an error.

He made AA Columbus in 1989. In April, he helped Columbus to a win against Charlotte with a run-scoring single. That same night, he got three other hits, going 4-for-4, The Rock Hill Herald wrote.

Sanchez knocked in 54 runs for Columbus in 1989. He moved to AAA Tucson for 1990, what would be his final season. That year, he got into 73 games for the Toros, But Sanchez hit just .183, with no home runs, ending his career short of the majors.