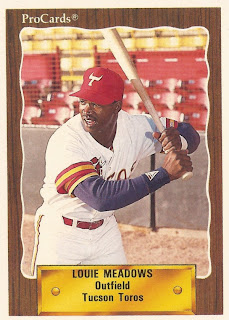 But it was a major league spot.

"I don't mind that," Meadows told The Sentinel early that March. "You have to start somewhere. If I can get into that role, other things will start falling into place."

Meadows' career began in 1982, taken by the Astros in the second round of the draft, out of North Carolina State University.

Meadows started at single-A Asheville, hitting .316 in 66 games. He made AA Columbus in his third season, then AAA Tucson in his fifth.

In July 1986, Meadows first made Houston. He got into six games for the Astros, six at bats. He picked up two hits.

"This is a very important time for me," Meadows told The Associated Press after his call back. "It's exciting just to be here again, especially when you know you belong here."

Meadows could never quite show he belonged, at least at the plate. Coming back for 1989, Meadows got another 51 at bats, picking up nine hits for a .176 average. One of his June hits, though, resulted in two runs.

Meadows played 15 games for the Astros in 1990, then 15 more for the Phillies later. Between them, he got three hits in 28 at bats, ending his big league career. His playing career then ended the next year, with one last season at AAA.