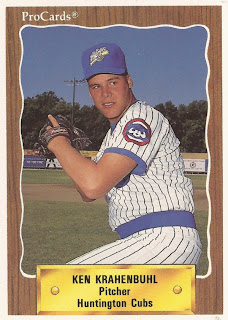 Starting his professional career in 1990, Ken Krahenbuhl knew what he had to do and he was going to set out and do it.

"I want to improve my pitching in every outing," Krahenbuhl was quoted as saying on his card back. "I want to help the team win."

What he presumably also wanted to do was to be looked at as a serious pitcher. Years later, as he extended his career in independent ball, that wasn't necessarily the case.

Krahenbuhl was the guy traded from one independent club to another in July 1998 for a player to be named, cash, and 10 pounds of catfish.

The player to be named and cash, though, were quickly forgotten. Krahenbuhl ended up being the guy traded for fish.

He also was the guy who responded by going out in his first game with his new team and throwing a perfect game.

Krahenbuhl's pro career began that year in 1990, taken by the Cubs in the 19th round of the draft, out of San Bernardino Valley College.

With the Cubs, Krahenbuhl was assigned to rookie Huntington. Krahenbuhl, though, isn't credited as pitching that year. His first credited time came in 1991, with single-A Peoria. At Peoria, Krahenbuhl went 7-8 over 23 starts, with a 3.96 ERA. He picked up one of those Peoria wins in a six-inning effort in May.

For 1993, Krahenbuhl started his time in independent ball with the Northern League's Rochester Aces. He got six starts there and isn't credited as playing anywhere in 1994.

After two shortened seasons playing with Palm Springs and Tri-City in 1995 and 1996, Krahenbuhl's road to that trade began in 1997 at Greenville in Mississippi. He went 8-5 for Greenville before moving to Pacific in the Western League to start 1998.

At Pacific, he ended up going 4-5 over 11 starts, with an ERA of 3.51 ERA. Krahenbuhl later explained what happened next to The New York Daily News. Though he pitched well, the team was a loser. Krahenbuhl decided on his own to return to Greenville.

Pacific could trade him or not, but he was staying in Greenville, Krahenbuhl told The Daily News. They traded him, then he learned about the trade's details

"They (Pacific) were going to embarrass me for leaving," Krahenbuhl told The Daily News. "I really felt insulted. Really wanted to shove it in their faces. It was on my mind, believe me, when I went out there. I didn't want to be known as the guy who was traded for fish. I wanted to show 'em."

Krahenbuhl went out and showed his real worth, throwing that perfect game.

Krahenbuhl ended up playing the rest of that year with Greenville and then the next. His 1999 season, 13 outings, ended up being his last as a pro.

A few weeks after the trade, Krahenbuhl spoke with The Lubbock Avalanche-Journal about his hopes as a professional. He wasn't really hoping to get back in affiliated ball. He just really wanted to play and win.