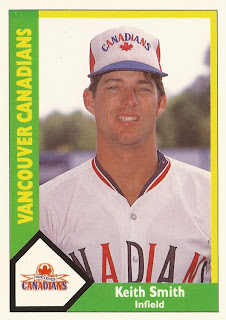 Whether his comments were truly aimed at him or at perceived underperforming other players, George Steinbrenner had some good things to say in April 1984 about the newest Yankee Keith Smith.

In seven fielding opportunities, Smith was perfect. Never mind his 0 for 2 performance at the plate. It was also his major league debut.

"That's the best shortstopping I've seen since I've had this club," Steinbrenner told The Associated Press after the game.

Despite Steinbrenner's comments, Smith's season in The Bronx - and major league career - was a short one. He got into just one more game that year and four major league games the next. He went 0 for 5 overall.

Smith's professional career, however, would continue on for a total of 14 seasons. He would also make one last bid to return to the majors, in spring 1995, playing replacement ball with the Cubs.

Smith's career began in 1979, selected by the Yankees in the 15th round of the draft, out of Canyon Country High in California. He started that year at short-season Oneonta, hitting .244 in 56 games.

After getting his brief shot with the Yankees in April 1984, Smith returned to Nashville. He also made the Southern League's All-Star team. He spent 1985, outside his four-game stint with the Yankees, at AAA Columbus.

Smith stayed with the Yankees into the 1986 season, before moving to the Brewers. He played at AA El Paso and AAA Vancouver. He then played at AAA for the remainder of his playing career.

By 1989, Smith was in the White Sox system, playing back at Vancouver. That may, Smith may have not gotten any accolades on his fielding, but he was likely fine with that. Vancouver pitcher Tom Drees threw two consecutive no-hitters. The second came as Smith bobbled a seventh-inning ball, a bobble that went for an error, not a hit.