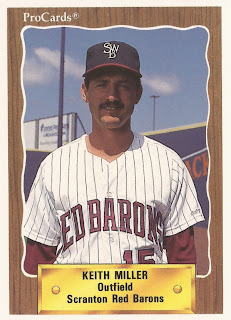 Keith Miller got his first major league hit in 1988 in his seventh at bat. As it turned out, it was a big hit, according to The Philadelphia Inquirer.

Miller's Phillies down 5-0 early, the rookie outfielder cleared the bases with a second-inning double. It was a game the Phillies came back to win.

"In a lot of ways, that was as big a hit as any," Phillies manager Lee Elia told The Inquirer afterward of Miller's hit. "He put us right back into the game after we were stunned in that first inning."

Miller debuted with Philadelphia the previous month. He ended up getting into 47 games on the year. He would only get into just eight more.

Miller's career began in 1984, taken by the Phillies in the 16th round out of Lubbock Christian University.

Miller started at short-season Bend and single-A Peninsula. Between them, he hit .315. He moved to AA Reading in 1985, hitting .295 there with six home runs.

Miller hit one of his 1987 home runs in a June game, off an Oil Can Boyd changeup.

"He had been throwing quite a few, he just got that one up," Miller told The Bangor Daily News of the Boyd changeup. "It was 2-2. In that situation, you really can't guess a pitch. If he would have got it down in the strike zone I might have missed it."

It was in May 1988 that Miller got his call to Philadelphia. In 47 total games that year for the Phillies, Miller recorded just 48 at bats, getting eight hits. He also started just one game, Aug. 4, going 1 for 4 in that contest with a strikeout.

He returned to the Phillies in 1989, but not until September. In Miller's eight games that year, he also started just one. He picked up three hits in 10 at bats, ending his major league career.

Miller continued playing in the minors until 1993. He moved to the Pirates system in 1991, playing at AAA Buffalo. He then played his final two seasons in the Rangers system, at AAA Oklahoma City.