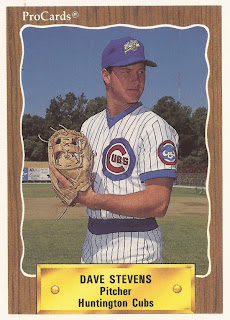 Dave Stevens made it through his first three-plus seasons in the Cubs organization as a starter. But that wasn't really where he wanted to be.

What Stevens wanted to do, he told The Los Angeles Times in July 1993, was be a reliever.

"Hopefully some day they'll put me in the bullpen--that's where I want to be," Stevens told The Times. "I like the idea of playing every day, and there has been some talk of me moving there. But I don't know what they want to do."

Soon after, Stevens made it to AAA Iowa, turning reliever. The next season, Stevens was a reliever in the majors, a place he'd be each season after that through 2000.

Stevens' pro career began in 1989, taken by the Cubs in the 20th round of the draft, out of La Habra High School in California.

Stevens then hit AA Orlando and AAA Iowa in 1993 before moving to the Twins for 1994 in a trade. It was with the Twins that Stevens first made the majors, getting called up in May to Minnesota.

Stevens picked up his first big league win in relief in early June, a four-out performance against the White Sox.

"I thought it was the worst thing that could happen to me when I got traded. It turned out maybe it was the best thing," Stevens told The Chicago Tribune after that win. "I hope I can prove them wrong."

In 1996, Stevens got 49 outings, but should have had more. After giving up home runs in consecutive outings against the Indians that July, Stevens took out his frustrations on a Jacobs Field telephone box, according to The Associated Press. He was out hurt for more than three weeks.

"I punched the box with my right hand and broke my thumb," Stevens recalled to The AP in 1999. "It was the worst decision I've ever made."

He finished out his career with five outings in Cleveland in 1999 and two with Atlanta in 2000, ending his big league career after time in seven big league seasons.