Chuck Malone, Benefit of the Doubt - 596 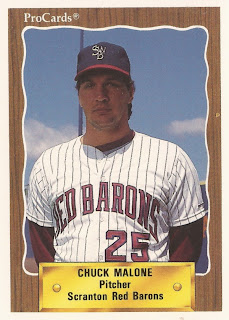 Nick Leyva was upset at his Philadelphia pitchers after 5-2 loss to the Cubs in September 1990. He just wasn't so upset with Chuck Malone. It was Malone's major league debut, after all.

Malone came into the game in the sixth, giving up two walks, the second walking in a run. Then he set down four straight to end his outing.

"It was his first time out there, so I'll give him the benefit of the doubt," Leyva told The Allentown Morning Call after the game. "He might have been jittery. He got them out the next inning. He's got some kind of arm and that kind of track record. He either walks them or strikes them out. Not too many hit him. If he gets it going, he'll really be something."

Malone went on to get into six more games that September, posting a 3.68 ERA. But he never really got going. He never returned to the majors.

Malone joined the Phillies organization in 1986, taken in the fifth round of the January draft. He played that year at short-season Bend, going 2-6 with an ERA over 5. Used mostly as a reliever, he got his first start in August, going seven innings and striking out nine.

He made AA Reading in 1988 after a season at single-A Clearwater and a 3.90 ERA there. He also had a four-hitter in a 4-1 July Clearwater win. He won five straight early that year for Reading, though was shaky in that fifth win. He went seven innings, giving up four hits and seven walks, The Reading Eagle wrote.

"Chuck struggled," Reading manager Bill Dancy told The Eagle afterward. "He walked a lot of people, but still he got out of jams."

Malone spent 1990 at AAA Scranton, posting an ERA of 6.39. Still, he got his September call-up to Philadelphia. He got his first and only win against Montreal Sept. 21, pitching the 12th inning of a 5-4 win.

Back for spring training 1991, the Phillies manager was upset again. This time Malone was among Leyva's targets.

According to a wire service account, Leyva was blunt.

Malone played 10 games that year at high-A Clearwater and five more at AAA Scranton and he was done, without returning to the majors.