Brent Strom both pitched in the majors and coached there; He understood how pitchers differ 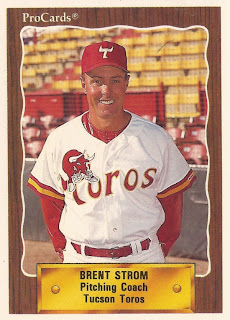 The Houston Astros had a new pitching coach in Brent Strom and Astros starter Shane Reynolds liked the pick, he told The Associated Press.

Strom took the Houston pitching coach job in 1996, after 15 seasons coaching in the minors.

"One good thing about Brent is that he doesn't think every pitcher's the same," Reynolds told The AP that February. "Everybody has different mechanics, and he understands that."

Strom's time in Houston would be brief, just that 1996 season. But he would go on to return to the majors later for two seasons with the Royals.

Strom's time as a coach in both the minors and the majors also came after a decade-long pro career as a player, Strom making the majors as a pitcher in five separate seasons.

Strom's baseball career began in 1970, as a first-round pick in the June secondary draft by the Mets. The Mets selected Strom out of the University of Southern California.

With the Mets, Strom started at single-A Visalia, hitting AA Memphis and AAA Tidewater in 1971.

Strom finished out 1976 strongly, throwing a three-hitter, in a 6-1 win. He also had a no-hitter going for six innings, all while holding an early lead.

"You can't believe how a pitcher feels to see four runs go up for him early in the game," Strom told UPI afterward. "Usually it's the other way around for me."

Strom played his final major league game in 1977, then his final professional game in 1981. In 1981, Strom also started his post-playing career as a coach in the Dodgers system.

Strom continued with the Dodgers through 1989, spending much of that time as pitching coach at AAA Albuquerque. He then moved to the Astros system and AAA Tucson for 1990, making his way to Houston for 1996.

After going through the Padres and Expos systems, Strom moved to the Royals and Kansas City for 2000, as the big league pitching coach.

In April 2000, as Strom took the reins of the Royals pitching staff, Strom was optimistic, he told The AP. "We're making strides," Strom told The AP as the season began.