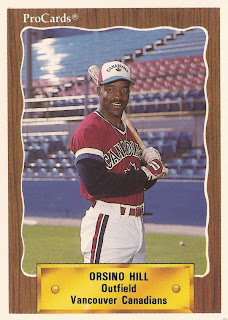 Orsino Hill returned to AA in 1989 and he was glad to be back. That's because his playing time up at AAA Iowa had been inconsistent.

Consistent playing time, though, was what he needed, Hill told The Rock Hill Herald that July.

"It feels good to be back in Charlotte because I will get a chance to be an everyday player again," Hill told The Herald after helping Charlotte to a win. "I need to play every day to get my stroke and my rhythm right."

While Hill got his chance to get his stroke and rhythm right at Charlotte that year, Hill never got the chance to do so in the majors. In a career that spanned 12 seasons, Hill made it to AAA in eight of them, but never made it to the bigs.

Hill's career began in 1982, taken by the Reds in the first round of the January draft out of Los Angeles City College.

Hill moved to single-A Cedar Rapids in 1983, the single-A Tampa in 1984. He made AA for the first time in 1985 at Vermont. That May, a Hill home run led to an extra-inning win over Pittsfield.

Hill stayed with the Reds through 1987. He moved to the Expos to start 1988. Before that, though, Hill spent part of his off-season in Los Angeles, playing in a conditioning program with major leaguers, a program held on a bad field in the South-Central neighborhood, The Los Angeles Times wrote.

"The outfield's full of divots, and shadows make it hard to see," Hill told The Times of the conditions. "If you play well here, you can play well anywhere."

Hill played that year at AA Jacksonville and AAA Indianapolis with the Expos. He then moved mid-year to the Pirates, playing at AA Harrisburg.

Hill moved to the Cubs system for 1989, then to the White Sox system for 1990. He continued playing in the minors through 1993, playing for the Oakland and Angels systems.

In spring 1992 with Oakland, Hill hit a game-winning home run. But he spent the year at AAA Tacoma. In his last year, he played 59 games back at single-A Cedar Rapids with the Angels and just nine games back at AAA, at Vancouver.

Hill has since gone on to be a coach and a scout. He served as a coach at single-A Burlington in the Midwest League in 2000. He has since served as a scout with the Dodgers.

Among the players Hill has signed has been left-hander 2011 first-round pick Chris Reed. Reed has hit AA Chattanooga in 2012. Speaking to MLB.com after Reed's signing, Hill said he uses his experience as a hitter to evaluate pitching talent.

"I put all that aside, and I give it the eye test," Hill told MLB.com, referring to the normal metrics of evaluating pitchers like Reed. "And I always say, 'Would this guy give me trouble?' I'm not saying he would get me out, but I know for sure I wouldn't want to face him."