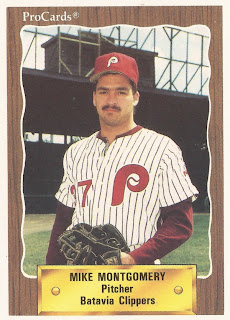 East Tennessee State starter Mike Montgomery was a work horse for his team in the late-1980s.

From 1987 to 1990, Montgomery started 38 games for the team. It's a total that remains tied for fifth all-time at East Tennessee State, according to the school's media guide.

In 1990, he was also effective. giving up 8.92 hits per nine innings of work, according to the media guide. That mark is also still fifth best in school history.

From that start, Montgomery turned pro. But the hurler couldn't stick. His professional career lasted just a single season, 21 outings.

Montgomery signed with the Phillies in June 1990, taken by the team in the 37th round, out of East Tennessee State. He went to East Tennessee out of Carroll County High School in Hillsville, Va.

At East Tennessee State, during that 1990 season, Montgomery was credited with holding an early lead at Virginia Tech, picking up the win.

With the Phillies, Montgomery went to short-season Batavia. There, Montgomery turned reliever. He got into 21 games, starting just three.