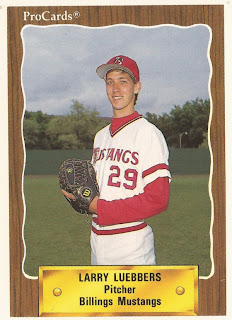 Larry Luebbers made the majors in three seasons. His second, though, didn't come until six seasons after his first.

In that return, Luebbers put in a quality start for the Cardinals, going 6.2 innings and giving up three earned runs, but still taking the loss.

"I felt good. I'm so happy to be here," Luebbers told reporters after his return. "I was just trying to pitch OK. I wish I could have kept it a little closer. Hopefully, I can build from this and stick around long enough to do something positive. My goal is to go out there and see how long I can stick around here."

Luebbers ultimately stuck around for eight starts that year and 14 more outings the next, finishing his career with games played in three big league seasons.

Luebbers' career began in 1990, taken by the Reds in the eighth round, out of the University of Kentucky.

In 1993, Luebbers made AAA Indianapolis. He also made Cincinnati, debuting July 3 with his mother in attendance.

In that debut, Luebbers also picked up the win, going 5.2, giving up three earned runs. In his second start, he went five and gave up a single earned run.

"Luebbers pitched good again and I like his composure," Reds manager Davey Johnson told The Associated Press after that second outing. "He started his first game at home and he lives near there. he had 200 friends at the game and that's a lot of pressure."

Luebbers ultimately started 14 games for the Reds that year. He then didn't make it back to the bigs until 1999. In the meantime, Luebbers played at AAA with the Cubs, Reds, Braves and finally the Cardinals.

It was in July 1999 that Luebbers got his second shot. In eight starts for the Cardinals, Luebbers went 3-3, with a 5.12 ERA. He then returned to the bigs again in 2000, with the team that drafted him, the Reds. In 14 outings, one start, Luebbers posted a 6.20 ERA, ending his big league career.

His playing career, though, didn't end until 2002, Luebbers playing at AAA for the Athletics.

Luebbers has since returned home to Kentucky, becoming president of MainSource Bank's Kentucky banks. But he's still involved in baseball, according to The Frankfort State Journal, Luebbers serving as a coach for 12-year-olds and giving lessons.