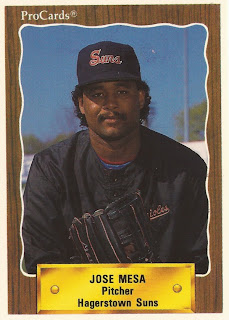 By August 1995, Jose Mesa had racked up 37 saves for the Cleveland Indians and he had yet to blow one.

It was just Mesa's first season as a closer, second as a reliever, after previously making the majors as a starter.

"When you're just coming in for one inning, you're coming in and giving it everything you've got," Mesa told The Associated Press after his 37th-straight save conversion. "This is the first time I've done it, and so far I've had success. I like it right now. I don't know how long it's going to last."

For Mesa, it lasted another dozen seasons, picking up more than 20 saves in seven of those.

Of all those save opportunities Mesa had over his long career, is one on baseball's biggest stage - Game 7 of the World Series - that is perhaps most remembered. And that save opportunity is one that he couldn't convert.

Mesa's professional career began back in 1981, signed by the Blue Jays as an undrafted free agent, out of his native Dominican Republic.

With the Blue Jays, Mesa started in 1982 in the rookie Gulf Coast League. He made single-A Florence in 1983, then didn't hit AA Knoxville until 1986. For 1987, he returned to Knoxville, arriving with the Orioles in an early-September trade.

"I felt pretty good when I started pitching," Mesa told The AP after the game. "But, you know, these guys can hit pretty good."

From there, Mesa returned to the minors, not returning to Baltimore until 1990, then for seven games.

Then, in 1991, Mesa left the minors behind. He got 23 starts for the Orioles that year, and 27 the next between Baltimore and Cleveland. Mesa arrived at Cleveland in another mid-season trade, this time traded for a minor leaguer.

With the Indians, Mesa pitched another season as a starter. In 1994, he found a home in the bullpen, with 51 relief outings.

In 1995, he was nearly unhittable, so much so that he came in second in the American League Cy Young balloting.

Over that season, Mesa got into 62 games for the Indians, posting a miniscule 1.13 ERA and racking up a league-best 46 saves. He didn't blow his first save of the year until August, a string of 38 total converted.

That October, Mesa got his first taste of the World Series. Against the Braves, Mesa pitched three innings of relief in Game 3, picking up the win. In Game 5, he picked up the save, though he gave up two earned in the process.

For 1996, Mesa continued saving games, saving 39 in all. He also became an All-Star for the second-straight year. In 1997, he saved 19 but over just 38 outings. In the playoffs, by Game 7 of the World Series, Mesa had saved four games, but also blew two.

In Game 7, he came into the bottom of the ninth with a 2-1 lead. He started with a single, a strikeout and a single. He then gave up a long fly to right. It was caught, but the damage was done. The Marlins' Moises Alou tagged and scored, tying the game, a game the Indians went on to lose.

"I feel bad because I let my team down," Mesa told The AP later. "I had the lead in the ninth and I didn't do my job."

Mesa's time with the Indians ended in mid 1998, traded to the Giants. He returned to the closer's role in 1999, with the Mariners, saving 33. After returning to Seattle for 2000, Mesa found a new home with the Phillies.

With the Phillies, Mesa saved more than 40 games three times, more than 20 in two other seasons. He finished out his career with the Rockies in 2006 and Detroit and Philadelphia in 2007.

In mid-2007, Mesa was released by the Tigers. He still wanted to play, but he spoke to The AP about the prospects that his career might be over. It was a career that ended with more than 1,000 appearances and 321 total saves.