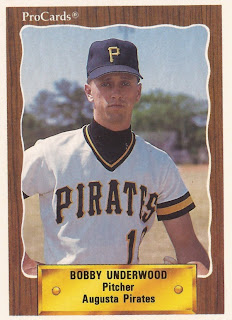 Bobby Underwood was a valuable player at the University of South Carolina in 1988.

That's because Underwood was a utility player in the broadest sense: He could play multiple positions for the Gamcocks - including throw from the mound, according to The Spartanburg Herald-Journal.

"He could be a real fine pitcher or a real fine first baseman if we could just make up our minds," Raines told The Herald-Journal that April, "but our team is such that we need him to be both."

Underwood was ultimately fortunate enough to have his coaches settle on pitching, at least for one game. That one game on the mound, according to The Pittsburgh Post-Gazette, helped get him drafted.

Underwood's professional career began that year in 1988, when the Pirates selected him in the 17th round of the draft, out of the University of South Carolina.

In a March 1987 game for South Carolina, it was Underwood's bat that showed, hitting a two-run home run to help his team to a 6-4 win.

But it was a start in late-May for South Carolina that got Underwood noticed, according to The Post-Gazette. He was spotted on TV by Pirates GM Syd Thrift, who was impressed enough to send a scout to see him.

"That last inning of ball he threw the other night," Pirates scout Jack Bowen told The Post-Gazette, "has given him a chance."

Underwood took that chance and turned it into a four-season pro career, but one that came short of the majors.

Underwood started at short-season Watertown, getting 19 outings and two starts, with a 5.84 ERA. For 1989, Underwood moved to single-A Augusta, getting 23 outings, 10 starts. At Augusta that year, his ERA dropped to 2.70.