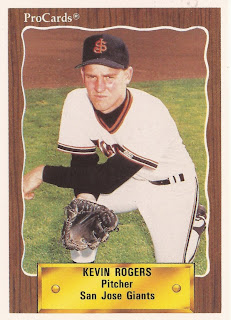 Kevin Rogers thought about quitting baseball in 1996, but some good outings during rehab kept him going, he told The South Florida Sun Sentinel in spring 1997.

"The last year was the worst in my life," Rogers told The Sun-Sentinel of his own come back from injury and life-threatening illnesses to his father and brother, "and without the birth of my daughter, it would have been a total loss. Things are looking a little better now."

Rogers spoke that spring trying to return to the majors nearly three seasons after he last played. A promising young left-hander, who posted a 2.68 ERA in his only full major league season, Rogers saw his career placed in serious doubt in 1994 due to a blood clot in his arm.

But Rogers' comeback didn't pan out. Sent to the minors, he threw his final pitch the next year in independent ball. 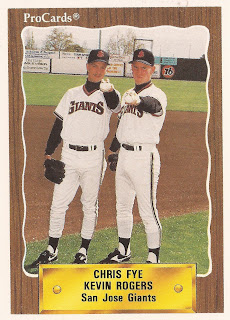 Rogers' career began in 1988, taken by the Giants in the ninth round out of Mississippi Delta Community College.

Rogers made AA Shreveport in 1991, after going through single-A San Jose in 1990. He saw AAA Phoenix and then, in September, San Francisco. Rogers started six games for the big league Giants in 1992, going 0 for 2, with a 4.24 ERA.

"I wanted to win for the historical purpose of it," Rogers told The Associated Press, "in case something happens."

His breakout year came the next season, with both Rogers and the Giants back in San Francisco. In 64 relief outings, Rogers posted a 2.68 ERA. He also struck out 62 in 80.2 innings.

Rogers was poised to do the same thing in 1994. He started off with nine outings, giving up four earned runs in 10.1 innings. In mid-April, Rogers was involved in a fight with opposing catcher Benito Santiago charging the mound after a Rogers tight pitch.

"I came down on top of him," Rogers told The Sun-Sentinel of the brawl. "He got on me so quick. I thought about throwing the glove at him like Trevor [Wilson, Giants pitcher] does. At first, I thought he was going to throw a punch. I just grabbed him."

Soon after, though, Rogers had more pressing things to worry about.

During the May 1 game, Rogers noticed his hand was cold, though he was sweating, his agent Don Wolfe told The New York Times later. It happened again soon after.

The problem was ultimately diagnosed diagnosed as a blood clot in his arm, the same kind of clot J.R. Richard and the White Sox' Roberto Hernandez had, though with different results.

"You want to ask yourself why. Why did this happen to me?" Rogers told The AP in 1997. "In your mind and in your body, you feel like you can still pitch, but there's one little thing in your arm that's not letting you do it."

Rogers missed the rest of 1994 and pitched in just seven games in 1995, in the minors. Though his sometimes encouraging comeback in 1996, Rogers didn't play in the minors.

Trying to make the Braves in 1997, Rogers felt back to form and the Braves thought me might be, too.

"We knew when he was healthy he was almost unhittable," Braves GM John Schuerholz told The New York Daily News. "At least he was against our lineup. We knew what he'd been through but we felt he could come back. He looks good."