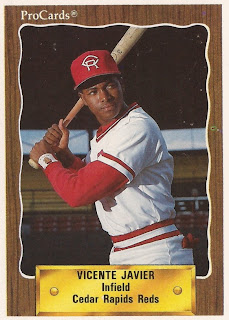 Vicente Javier first arrived at single-A Cedar Rapids in 1990, calling Veterans Memorial Stadium home. The infielder then returned there in 1991 for another season in the city and at the stadium.

That 1991 trip, though, wasn't his last to the city. He returned one last time, 10 years later, in 2001. This time, the infielder took to the mound, helping throw the ceremonial last pitch at the old stadium, ahead of the new stadium opening in 2002.

By the time he threw out that last pitch in 2001, Javier had already taken his last pitch as a hitter, 10 years earlier, back in 1991. It was a career that lasted just five seasons and never saw Javier get above single-A.

Javier's career began in 1987, signed by the Reds as an undrafted free agent out of his native Dominican Republic.

Javier started work in the rookie Gulf Coast League, hitting .299 in 24 games. He moved to rookie Billings. At Billings, though, his average dropped to .210 over 31 games.

For 1989, Javier arrived at single-A Greensboro in the South Atlantic League. With Greensboro, Javier hit .203 in 59 games.

It was in 1990 that Javier made Cedar Rapids, getting into 62 games for the single-A Reds. Those 62 games were the most Javier played in a single season in his career. With the Reds, Javier hit just .193.