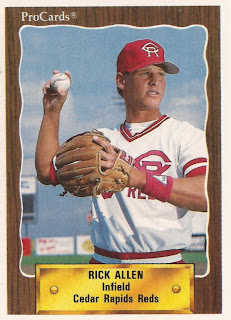 Rick Allen tried to look forward in 1992, his fourth season as a pro. He'd hit .251 the previous year at AA Chattanooga. But just one hit in 11 at bats and Allen got his release.

"I dug myself a pretty deep hole at the start of the season," Allen told The Los Angeles Times that August, having played out the year with the Twins at AA Orlando. "I haven't really done enough to move up next season, but we'll see what happens."

For Allen, what happened from there was little more. He wasn't recorded as playing in 1993, then played out two seasons in independent ball, ending his career without making the majors.

Allen's professional career began in 1989, taken by the Reds in the 10th round out of Loyola Marymount in Los Angeles. He went to Loyola out of Calabasas High School, north of LA.

Allen played his first year with the Reds at short-season Billings. At Billings, Allen got into 26 games, hitting .321. That July, regarding his route out of College, Allen told The Times he was satisfied with the result.

"I was happy to go with the Reds," Allen told The Times. "I always loved the way Pete Rose played. I liked the old Big Red Machine."

From Billings, Allen moved to single-A Cedar Rapids for 1990. There, the third baseman hit .233 with eight home runs. He then arrived at Chattanooga for 1991, hitting that .251, with four home runs.

As The Times followed his career, Allen told them about the sights - and the smells - along the way.

With Billings, the team stopped off at Yellowstone to see Old Faithful. At Chattanooga, there was the Civil War history. At Cedar Rapids, there was the smell: Quaker Oats is located downtown, giving off the smell of burnt cereal.

"This is a Civil War town," Allen told The Times as he played in Tennessee. "I really haven't had much time to find out a lot about it. But I know this, it sure smells better than Cedar Rapids."