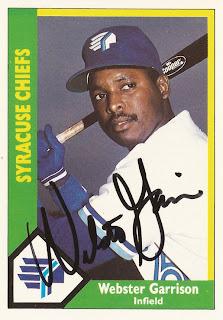 BAKERSFIELD, CA - Webster Garrison heard the voice and thought maybe somebody was playing a trick on him.

But it was no trick. That was Billy Beane and Garrison was going to the major leagues.

After playing his first professional game at the age of 18, Garrison was now 30. And he was going to the major leagues for the first time.

"It freaked me out, man. It was unbelievable," Garrison told The Greatest 21 Days recently. "I had to pinch myself a couple times. A great, great, great feeling. Unbelievable. Playing that many years, putting in all that time.

"In your mind, you say, 'aw, man, I'm tired of this, I'm going home,'" Garrison added, referring to the times thought he would never make it, "then you catch yourself going back to the ballpark every day, because you love the game of baseball."


Garrison is still going to the ballpark every day, now in his second season in 2012 as manager of the California League's Stockton Ports. His time with the Ports is part of a coaching career that has now spanned more than a decade. Garrison became a coach after a playing career that spanned a decade and a half.

In that decade and a half playing career, Garrison made it to the bigs just that once, for five games, 10 plate appearances and one walk.

Garrison spoke to The Greatest 21 Days recently in Bakersfield, Ca., before his Ports took on the Bakersfield Blaze at historic Sam Lynn Ballpark. Garrison spoke of that trip to the bigs, but also his long wait to get there.

Garrison's professional career began in 1983, taken by the Blue Jays in the second round of the draft, out of Ehrat High School in Marrero, La.

Garrison had played since he was a kid, the place to go being the Marrero Action Community playground, he recalled. There, he played every sport that was available.

Getting into middle school and high school, Garrison played both baseball and football.

That meant Garrison had a choice to make. He had planned to go to the University of New Orleans. And garrison didn't make it until three days before school was set to start.

"I really had my sights set on going to UNO and playing for the University of New Orleans," Garrison said, "but Toronto kept pursuing me and the signing bonus kept getting more and more and more to where I couldn't say no."

"They made me an offer where I couldn't refuse," he said. "Not only was I delighted, I was excited as well. Because as a kid, you always want to go pro."

Turning pro, Garrison was on his own for the first time, he called it a new world. He'd never played so many games in his life. He also wasn't prepared for the physical toll the season took.

Starting at single-A Florence in the South Atlantic League, Garrison recalled doing well his first couple months. Once June, July and August came, though, his average began to drop.

From there, he went to instructional league, with little time off. But it was also there, Garrison said, that he learned more than he did his first season. "That's where we did a lot of work and learned a lot of baseball."
Garrison moved to single-A Kinston in 1985 and got his first brief look at AA Knoxville in 1986. His first extended time at AA came in 1988. He then made AAA in 1989.

When he made AAA, Garrison said he started looking ahead to the majors, thinking he would make it. And, though he was in his sixth professional season, Garrison was also still just 23.

By the end of the year, Garrison was looking for that trip to Toronto. He'd played half the year at Knoxville and the other half at Syracuse. Between them, he hit .277. But he also hit just four home runs.

"I thought I played well enough, but at the time, I wasn't the physical strong guy, like some of the other guys on the team," Garrison said. "I was the little, get-on-base guy."

He just wasn't the guy the Blue Jays were looking for then, Garrison recalled.

"There were some guys ahead of me, and it was tough because at that time,"Garrison said. "you're goal is you want to go top the big leagues and I'm ready to go right now. But physically, I wasn't ready."

Garrison was also disappointed the next spring, when he didn't go to major league camp. At the same time, though, Garrison recalled having the mindset of going back to minor league camp and showing what he could do.

That season, though, Garrison could do little. He ended up missing almost the entire year to injury.

Running to first, trying to play his game, running, Garrison felt a pop and went down. He came back from that injury and injured his hamstring again within a week, covering first on a bunt.

"Every time I tried to come back, I kept reinjuring my hamstring," Garrison recalled. "It was just a tough year the whole way around, mentally and physically."

He ended up playing in just 37 games that year for AAA Syracuse. He also definitely wasn't any closer to the major leagues.

For that, he'd have to wait another six years.

Note: This was the seventh of 10 interviews picked up on The Greatest 21 Days' late July 2012 trip to central and southern California. Links to other interviews are on the righthand column.
Posted by Steve78 at 10:49 PM