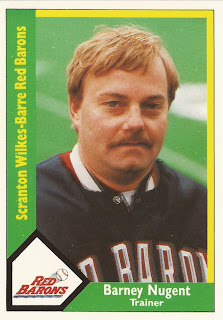 Dwight Gooden was playing in that May 1987 game with AAA Tidewater on a rehab assignment, saw one of his fastballs hit Ken Dowell squarely above the batter's eye.

Quickly checking Dowell over was his trainer, Barney Nugent: There were no breaks and he did not suffer a concussion, according to The Bangor Daily News.

"He does have a nice egg above his eye, though," Nugent told The Daily News. "Anytime a batter is hit like that, you have to be concerned. It can be a life-threatening situation."

Dowell was in his eighth season as a pro and he would come back from that fastball to make the majors for his one and only stint the next month.

Nugent himself was a decade into his training career and six years away from his major league stint, Nugent's stint, though, would be longer, 11 seasons as assistant trainer of the Giants.

It would also be a stint that saw him ask a major league security official for help with security in the Giants' clubhouse, specifically with the entourage of Barry Bonds. It was a request made in November 2001 along with head trainer Stan Conte and recorded in the 2007 Mitchell Report and a request that went unaddressed by Major League Baseball.

Nugent's training career began in 1977 in the Red Sox system, after graduating from Curry College and getting his masters from Indiana State University.

Me made the Phillies system by 1987, spending at least four seasons as head trainer at AAA for the organization.

By 1993, Nugent was in the majors, as assistant athletic trainer for the Giants. It was also the year Bonds arrived in San Francisco.

It was at the 2001 winter meetings that Nugent raised the issue of Bonds' entourage, during a lecture by the commissioner's office's head of security, The Mitchell Report reads, citing an account from head trainer Stan Conte.

The lecturer raised an issue about clubhouse security and Nugent stood up and relayed that similar issues existed in San Francisco, issues that appeared to be beyond local control.

Afterward, Nugent and head trainer Stan Conte elaborated to the lecturer, the commissioner's office's head of security. The issues had to do with Bonds and his entourage.

"According to Conte," The Mitchell Report reads, "(the security director) seemed to be familiar with the issue and promised that 'we're going to do something about this, it's an issue and we know what you're talking about.'"

The issue, though, wasn't resolved and the access continued. Suspicions would soon fall squarely on that Bonds entourage in providing steroids to Bonds and other Giants players, suspicions outlined in The Mitchell Report, Game of Shadows and elsewhere.

Nugent's time with the Giants continued through the 2003 season. He even served as trainer for the 2003 National League All-Star team. He retired, though, following that season due to illness

"He's a very caring guy," Conte told MLB.com upon his assistant's retirement. "He cared about his profession and cared about the players. He wouldn't hide anything from anybody and would always give his opinion without any window dressing."