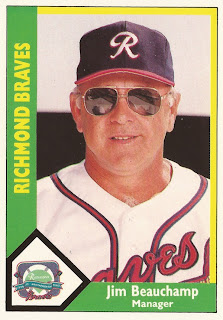 Mark Lemke thought he and his teammates got their manager in instructional league Jim Beauchamp upset one day in 1986, Lemke told The Associated Press years later.

But, to a team that include the young Lemke, David Justice and Ron Gant, Beauchamp looked toward the future, rather than that day's workouts.

"He got us together and told us if we work hard, one day this group will be riding down Peachtree Street in a ticker-tape parade," Lemke told The AP in October 1991. "Myself, I was thinking 'Where is Peachtree Street?'"

The occasion was that group of Braves entering the World Series against the Twins. That group included the Braves' first-year bench coach Beauchamp.

And, while that group didn't quite get that parade down Atlanta's Peachtree Street that year, Beauchamp and the Braves did get there as world champions four years later.

By 1991, Beauchamp was a good 16 years into his career as manager in the minors and coach in the majors. He was also more than three decades into his overall career in baseball, having spent 15 seasons previously as a player, 10 of those seasons with time in the majors.

And Beauchamp would continue in the game, staying with the Braves in one capacity or another until his passing in 2007, at the age of 68.

Beauchamp's managerial career began in 1975, the year after he played his last game as a player. He started at AA Columbus in the Astros system, an organization he twice played for. By 1976, he was helming AAA Memphis.

In 1985, Jim Beauchamp joined the Braves system, the organization he would be with for the rest of his career. He managed AA Greenville that year, moving up to AAA Richmond in 1988, stewarding the Braves' young prospects to the majors.

In June 1990, Beauchamp watched over a young Steve Avery, liking what he saw.

"He's got it written all over him," Beauchamp told The New York Times Regional Newspapers of Avery. "He's a superstar, you know, just the way he carries himself, handles himself on the field. There's just not enough good things you can say about him."

Beauchamp moved up to Atlanta in 1991 as bench coach, staying in that capacity through 1998, including the championship year of 1995.

He then moved on to Braves minor league outfielder instructor, then supervisor of minor league field operations.

In December 2007, Beauchamp passed away after a battle with acute myelogenous leukemia.

"As a son, my fondest memory of him was how much he told us he loved us," son Kash Beauchamp told The Atlanta Journal-Constitution after his father's passing. "As tough as he was as a competitor and a baseball man, he had a very soft side when it came to being a father."