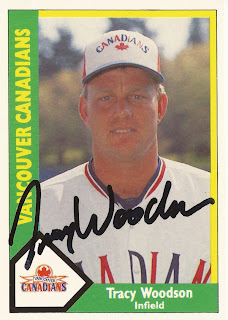 NILES, OH - Tracy Woodson had no shortage of advice.

And he needed the advice. In his seventh major league game, he was going up against Hall of Famer Nolan Ryan.

"A couple guys came up to me and said 'he don't know you, you don't know him,'" Woodson recalled recently to The Greatest 21 Days, "'look for the fast ball on the first pitch.'"

"On the first pitch," Woodson said, "I hit it and I knew it was gone. I tried to sprint around the bases as fast as I could."

Woodson also recalled the next pitch in his next at bat being at his head.

Woodson is in his sixth season as head coach Valparaiso University in 2012, after nearly a decade as a manager in the minors and a playing career that lasted 13. Woodson's major league career lasted parts of five seasons, the final two coming after he'd wondered if his playing career was over.

Woodson spoke with The Greatest 21 Days recently before a game at Eastwood Field in Niles, Ohio, his Valparaiso Crusaders visiting Youngstown State.

Woodson grew up a Braves fan in Richmond, Va., playing both baseball and basketball. His father Phil played basketball in college. Woodson remembers going with his father to just about every sporting event there was.

Woodson also played whenever he could, basketball, football, baseball. "I was going out and doing it 24/7," Woodson said.

"Nowadays, kids don't do that," Woodson said, "and I think that's why kids aren't as good. I tell kids they need to go out and play. Hit, run, throw, whatever it may be."

Woodson played well enough to get to college. He recalled almost going to High Point University to play both baseball and basketball. But he ultimately went to North Carolina State to play baseball. And he did well enough there to get taken by the Dodgers in the third round of the 1984 draft.

"That year I had was probably one of the most unbelievable," Woodson recalled of his last season at North Carolina State. "It seemed like I was in a groove the whole year."

Woodson continued that groove into the end-of-the-year tournament, hitting a home run - and doing it with scouts in the stands. One of the scouts there to see it, Woodson recalled, was Dodgers scouting director Ben Wade.

It also wasn't just a home run, Woodson recalled, it was probably the longest he'd hit all year.

"You've got to do something when the main guys are there," Woodson said, referring to the scouts, "and he was there and I think that helped me."

When it came draft time, though, Woodson was nervous. And, as the day went on, wasn't so sure of his status. Especially when he heard of players taken in the 8th, 9th and 10th rounds.

A couple weeks later, he was on the field as a pro. He also went straight to the Florida State League, at Vero Beach.

He also had to get used to playing every day. He also had to make the standard transition from the aluminum bats of college to the wood bats of the pros. Woodson didn't think he'd ever picked up a wooden bat before in his life.

"I think I went 0 for my first 15. I was pressing," Woodson recalled. But that soon changed. "I liked using it better than aluminum, once I got used to it."

The move to San Antonio was not only a move up, but an important move, Woodson recalled, because it put him in striking distance of the majors.

"Once you get to AA, you've got a chance to make it to the big leagues," Woodson said. "A lot of teams now take young guys right from AA to big leagues. I was fortunate to do that."

Woodson went right from AA in 1986 to making the Dodgers out of spring training 1987.

Woodson played well that spring, well enough to make it to the last cut. It was either him or Jeff Hamilton, Woodson recalled. The two had played together in the minors and Hamilton seemed like the higher prospect.

Woodson also recalled being a talker. Not that he was going to be a leader in the big league clubhouse as a rookie, but Woodson said he had always been a leader on his lower-level teams. He wasn't scared to say his peace.

"I played well and they called me in after the last exhibition game," Woodson said. "They said 'pack your stuff, you're going to be on the flight to Houston' and I just, I didn't know what to do. It was exciting."

He soon found himself sitting in the dugout as a major leaguer.

"You know you're just as good as those other guys," Woodson said of being there, "but you've got to be consistent day in and day out. You can do a lot of things that they do, but they do it for a longer period of time."

Woodson played in 53 games with the Dodgers that year, splitting time between Los Angeles and AAA Albuquerque. He did the same  the next year, staying up from July on- and getting time in the World Series.

Over the next three seasons, though, Woodson got into just four major league games and he thought his career might be over.

"Getting there's not the hardest part," Woodson said. "It's staying there. You've got to establish yourself. I knew what my role was. I tried to do what it was, but I kept going back and forth.

"When you go back (to the minors), you've got to play hard. You've got to keep showing them what you can do," Woodson said. "It's frustrating. But that's part of the job. There's a lot of guys that think they belong in the big leagues and I thought I did too.  I think I still played hard.

"Three years later, when I got into St. Louis, that's what got me back there, I think, was my attitude. and how I played."

But, before Woodson had his doubts about getting back, he experienced the reality of being in the World Series.