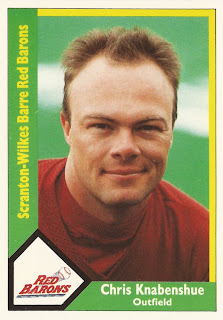 Chris Knabenshue had three hits in the previous game for the Charleston Rainbows. But his late miscue in the field meant those didn't matter, The Charleston News and Courier wrote.

In this April 1986 game, though, Knabenshoe got one more hit, and one less fielding miscue, going 4-for-4 with a home run in a Charleston win.

"I needed a game like this after last night," Knabenshoe told The News and Courier. "I can't remember the last time I was 4-for-4. That's what I was thinking out there. I don't even know if I've ever been 4-for-4."

Knabenshoe went on to have shots at similar games at AA and AAA, but he never got a shot to have a game like that in the majors. Knabenshoe, however, has since gone on to a career looking for other players who have shots at playing well in the pros, serving as a scout for the Braves.

Knabenshoe's career began in 1985, taken by the Padres in the fifth round of the draft, out of the University of Northern Colorado.

With the Padres, Knabenshoe started at short-season Spokane. There, Knabenshoe hit .279 in 71 games, stealing 10 bases.

That July, Knabenshoe got caught up in a bench-clearing brawl, becoming one of five members of his team to get ejected. Spokane also lost the game, thereby losing the brawl, Knabenshoe told The Spokane Chronicle.

"They did because they won the game," Knabenshoe told The Chronicle. "That's the only thing I feel badly about."

He moved to the Phillies system for 1990, playing at AAA Scranton. At Scranton, Knabenshoe hit a three-run home run in a July game. Overall, he hit just .237, with 18 home runs and 11 swipes.

Knabenshoe's time with Scranton was his last full year in affiliated ball. In 1991, he was credited with playing for four different teams and organizations, including in Mexico. He is last credited as playing in 1995, with just four games each at AAA Calgary and the Pirates rookie league team.