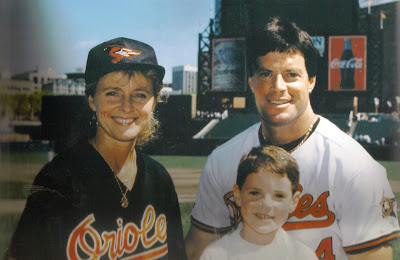 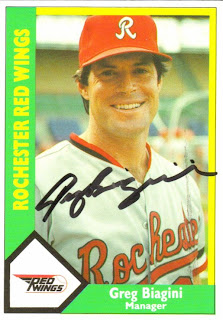 It was the phone call Greg Biagini had waited two decades for.

And he was out in the yard.

On the phone was Johnny Oates, manager of the Baltimore Orioles. Oates needed to talk to Biagini. He wanted Greg Biagini, the manager of the Orioles' AAA team in Rochester, to be his new hitting coach. In the major leagues.

"I just laughed and said 'Johnny, come on,'" Biagini's wife Vickie Biagini, the one to pick up the phone, recalled recently. "I thought Johnny was kidding."

Oates wasn't kidding and, after Biagini came in the house to hear it himself, the couple was soon in Baltimore, the lifetime minor leaguer interviewing for and then winning the job as a big league hitting coach.

"I can't even hardly describe the sensation, the feeling, when you spend so many years working so hard," Vickie Biagini recalled. "There is nobody that deserved ever to go up to the major leagues, whether it's a player or a coach, more than Greg Biagini."

Vickie Biagini, was Greg's longtime wife, shared her recollections of his baseball career recently to The Greatest 21 Days in a telephone interview from her North Carolina home.

She recalled the career of the man she had spent 27 years with, and a man whose life was cut short in 2003, from kidney cancer. 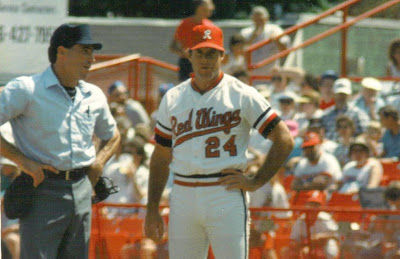 Greg Biagini as manager of the Rochester Red Wings. He managed at Rochester for three seasons, from 1989 to 1991. (Vickie Biagini Photo)
The two were together for virtually his entire career, the two meeting in her native Kinston, N.C., as Biagini worked his way up the Expos system.

Biagini was in just his second season as a pro, playing for the Kinston Expos. They were together as Biagini moved up to AA Quebec City and when he got looks at AAA and Mexico.

They were also together as Biagini began his managerial career, at rookie league Bluefield, working his way up to AAA Rochester and the major leagues.

Along the way, they had two children, Tanya, now 37, and Tanner, now 23. Young Tanya went along with her her mother to Mexico, as her father played there, extending his playing career in dusty ballparks only those who loved the game would feel at home in.

Tanner, 15 when his father passed away, has since gone on to follow his father into the game. Coming out of Virginia Military Institute, Tanner played two seasons in the Rays organization before going into coaching himself. Tanner was recently named volunteer assistant coach at the University of Richmond.

Greg and Vickie were together until 2001, when the two separated, though a separation that came on good terms. It was in 2003 that Greg was diagnosed with cancer, passing away that October at the age of 51.

It was the suggestion from one of her friends that got them together in Kinston. She was a cheerleader for the local college. Greg was a first baseman and outfielder from Chicago. Vickie joked she agreed to the meeting after being showed a picture of him.

They immediately hit it off. Soon, Greg was like family. Vickie recalled Greg and teammate Michael Marvalle being invited to her father's farm, her father's southern accent almost impenetrable for the northern players.

"Later on, they laughed about it, because they said they couldn't understand a word he said," Vickie recalled, "they just kept saying 'yes sir, yes sir.'"

Greg came to Kinston and the Expos having grown up in Chicago, one of three boys in a Catholic family, Vickie recalled. Greg played several sports, including baseball, football and hockey.

Vickie recalled hearing stories about Greg's mother ensuring the work was done in the house, before the boys could go out to the ballpark. If it wasn't done, they didn't go.

From there, he went to Iowa State University. At Iowa State, Biagini played all three sports. With the Cyclone hockey team, Biagini played well enough to be inducted posthumously to the school's Hockey Hall of Fame in 2009. He played on the football team his first year there.

Then came the Expos. Greg was selected by Montreal in the 12th round of the 1973 draft, after his junior year. Greg signed, but not before promising his parents that he would finish school.

Over the next couple winters, he did just that, Greg and Vickie spending their time in Ames as Greg finished his degree. "That made his momma happy," Vickie recalled. 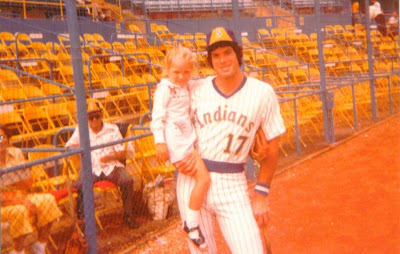 Greg Biagini with the Mariners AAA team at Spokane in 1979, his last year in affiliated ball. With him is his daughter Tanya.

With the Expos that first year, Greg played between short-season Jamestown and single-A West Palm Beach. He hit just .221 between them. At Kinston in 1974, though, his average jumped to .302.

He also tried to learn a new position in 1974, and learn to run, Vickie recalled.

The new position was catcher. It didn't last. "That lasted about two weeks," Vickie recalled, "they said 'I don't think that's going to work.' I mean, he took a beating."

As far as speed went, Greg didn't have it. "He was slow as all get out," Vickie said. She recalled their son Tanner more recently joking, after a poor run himself, that he had his father's legs. Greg, though, was credited with four stolen bases that year at Kinston.

Promoted to Quebec City for 1975, Vickie recalled one of his first games at Reading, Greg getting into the lineup and getting a hit. After the game, she also recalled Greg losing his keys at the ball park.

Another time, in Quebec City, she recalled Greg hitting a home run into the light pole. "He could hit for power and when he got a hold of that ball, it went," she recalled. "He crushed it." 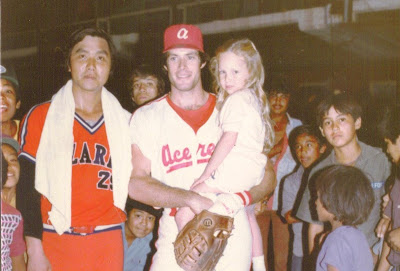 Greg Biagini with daughter Tanya in Mexico. Biagini played then with the Acereros de Monclova in the Mexican League. (Vickie Biagini Photo)
They were also his last three years in the affiliated minors. Signing with Seattle for 1978, Biagini made AAA, but he played in only 20 games. In 1979, he played in 19 games at AAA. The rest of his time, he spent in Mexico.

In Mexico, Vickie and their daughter Tanya would visit. His time in there, Vickie recalled, showed how much Greg loved the game. One story he'd tell was of a ballpark (at Tampico) where railroad tracks ran through the outfield.

"He didn't care," Vickie recalled, "He was determined. He loved it that much."

But Greg's time as a player was nearing an end, without making the majors. His time as a coach, though, was about to begin.

Go to Part 2 of the Vickie Biagini Interview: Proud Of
Posted by Steve78 at 12:00 PM