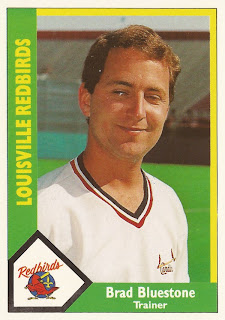 It was a move, he told the college paper for Bellarmine University in 2010, that he felt strongly he needed to make, at that point in his career.

Bluestone is still an assistant athletic trainer at Louisville's Bellarmine for 2012.

Bluestone's career as a trainer began in 1986, when he graduated from San Diego State University with a degree in athletic training, according to his CMC card.

He started out of college with the Cardinals organization. By 1990, Bluestone was in his first stint in Lousville, marking his first year serving as trainer at AAA.

In 1995, Bluestone was still with the Cardinals, named named the previous December as trainer for the high-A St. Petersburg Cardinals.

By 2005, Bluestone was back in the city where he debuted at AAA, Louisville, with Ballarmine.