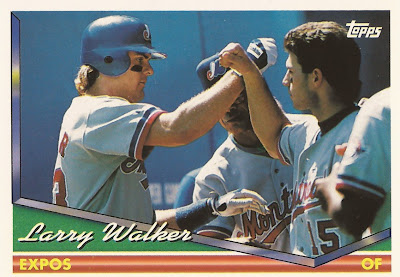 Going into 1993, talk of bringing in interleague play had begun, something that wouldn't be realized until 1997. But, adding his voice to the debate that spring was the Expos' new first baseman Greg Colbrunn.

To The Associated Press, Colbrunn said he believed interleague play would expose fans to the stars of the opposing league. For Colbrunn, the star he wanted to see was Don Mattingly.

"Growing up, I always rooted for the New York Yankees and always wanted to go to Yankee Stadium," Colbrunn told The AP. "Don Mattingly is my favorite player, and I would like to watch him in person."

For 1993, Walker would have to be content with watching teammate Larry Walker play, and his manager Felipe Alou manage, in between his own 70 games at first for Montreal.

In fact, that's Colbrunn, No. 15, congratulating Walker in the Expos dugout on Walker's 1994 Topps card, the manager Alou in the background.

I pulled Walker's card from a pack of 1994 Topps I picked up sometime last year in Cooperstown. The pack has been sitting by my desk since then, waiting to be opened. 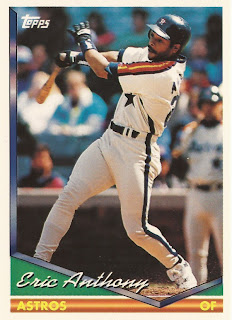 Once I got past the cards stuck together, there were actually several that had some good shots of players hanging out in the background. This Eric Anthony card wasn't the best card of those to show, but it did have the biggest challenge to identify the blurry player in the background.

I'm concluding that player is Ken Caminiti. Looks like his build, and he's holding the bat with his right hand, suggesting he's about to bat left. Not sure if that's true, but that's what I take from it and, as a lefty, how I would hold a bat on my shoulder.

That brick wall looks like Wrigley. Looking through the box scores over at Baseball-Reference, Caminiti, as a switch-hitter, is the only Astro to bat behind Anthony at Wrigley who batted left-handed. 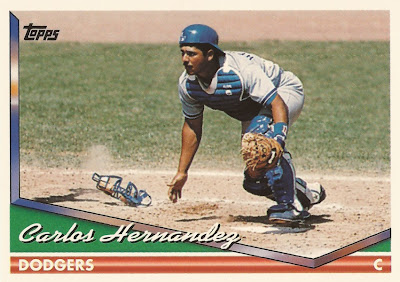 Elsewhere in the pack were two CMC set members. One of them, Carlos Hernandez, followed the line of a rather good shot on the front.

That's Hernandez apparently readying for a play at the plate. Hernandez was going into his fifth year in the majors in 1994. He made the CMC set as a member of the Albuquerque Dukes. He has yet to be featured here.

According to the Topps card back, when he made the majors in 1990, he became one of only three catchers from Venezuela to play in the majors. He went on to play in 10 seasons in the bigs. 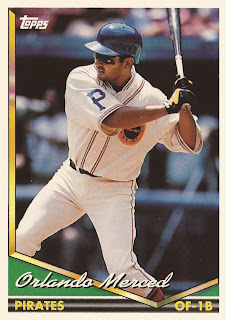 Here's Orlando Merced's offering, pictured in a Pirates throwback uniform. Merced made the CMC set as a member of the Buffalo Bisons. Merced was featured here in September 2010.

Finally, I'll throw in this Frank Viola Red Sox card, below. I was just struck by the expression on Viola's face as he delivers the ball.