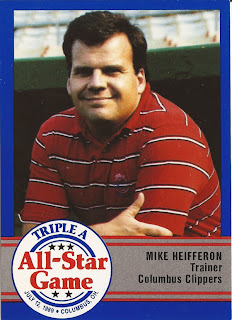 For my birthday a few months ago, I gave my wife a list of stuff from this shop we stumbled across in the mall.

I forget what we were coming back from but, tucked away on the second floor, was this shop with a bunch of cards. Ducking in, I spotted several that were interesting, or at least more interesting then a store like that should have. Among them was this small set of ProCards AAA All Stars from 1989.

So, naturally, when I open my gifts, really hoping to see this set, it wasn't there. Not that I was ungrateful or anything. I wasn't. She got me a couple of the grab bags I pointed out and an Andre Dawson card. But I guess I just didn't emphasize this set as much as I should have.

A few days later, I happened to drop it into the conversation as delicately as I could. She went back and got it. I love her.

Being the year before the CMC set came out, there are a few CMC set members here. Among them is Mike Heifferon, trainer for the Columbus Clippers.

I featured Heifferon here back in April 2011. The back of his All Star card sheds some more light on his career. That year in 1989 was his first at Columbus, his fourth in the Yankees organization. He got his Masters degree in exercise physiology from Ohio State. He was from Rochester, but lived in Toledo. 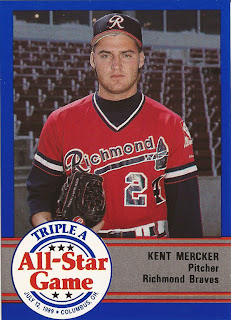 Kent Mercker made the AAA All Star team in his first year at AAA, fourth as a pro. The card backs include partial-year stats for 1989, through June 26 of that year.

Mercker was 6-6 by that point, with a 2.70 ERA. He debuted with Atlanta that September. Mercker was back at Richmond to start 1990, getting into the CMC set. He was featured here in September 2011. 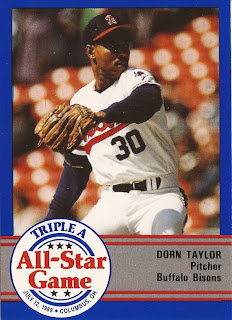 Dorn Taylor made the All Star team having already seen time in the majors earlier in the year. Taylor pitched in three early April games for the Pirates, giving up five earned runs in 4.2 innings of work. Those came after 14 outings for the Pirates in 1987.

By the All Star break at AAA, though, Taylor had compiled a 7-4 record with a 2.74 ERA. He would make it back to the majors in September and briefly in 1990 with Baltimore, marking the extent of his big league career. He started off 1990, though, at Buffalo, getting Taylor into the CMC set. Taylor has yet to be featured here. 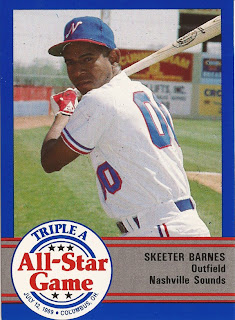 Skeeter Barnes made the team as a member of the Nashville Sounds, and having spent two brief stints in the majors earlier in 1989. At Nashville, he hit .311 by the break.

Barnes actually had spent time in the majors in five seasons by the point, but only played in nine big league games since 1985. His main career, though, was still ahead of him.

He made the CMC set in 1990 as a member of the Toledo Mud Hens. He was featured here in January 2011. Starting in 1991, Barnes played in four-consecutive big league seasons, including a high of 95 games in 1992. 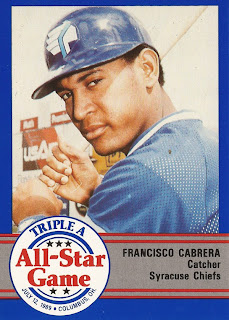 Francisco Cabrera made the game with the Syracuse Chiefs, posting a .318 average through 63 games. He debuted with the Blue Jays later that July. By August, he was traded to the Braves, where he would go on to make a name for himself for the Braves in the 1992 NLCS.

Cabrera made the CMC set with the Braves at AAA Richmond. By mid-May, he was back in the majors. Cabrera was featured here in August 2011.
Posted by Steve78 at 2:10 PM